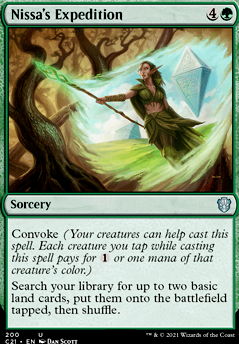 I would swap some of the ramp cards higher on the mana curve to more 2-mana ramp. With your commander being 4 CMC, the more 2 mana ramp you have the more likely you'll get them out one turn early. So I'm looking at things like Quandrix Cultivator (cool card regardless) and Nissa's Expedition . Maybe switch them for a Mind Stone , or Three Visits , or Farseek (this last one with an added inclusion of lands like Breeding Pool if it's within your budget, or more budget cards like Rimewood Falls or Mystic Sanctuary )

If you want to play with planeswalkers, Jace, Mirror Mage might be a cool addition.

Orvar, the All-Form is a sweet card, but I don't think this deck has enough instants and sorceries that could trigger his ability for the inclusion to be worth it. Either cut Orvar, or make sure you start adding more spells that can take advantage of it (maybe more clone token making spells).

Thank you, I will definitely consider your tips! While playing the alpha-poor version of the deck i noticed 2 things- poor drawing leading to card disadvantage, and mana flooding problem. I resolved these in this beta-version by adding Camaraderie , but also Nissa's Expedition as well as Flower / Flourish for some mana searching, so that I can actually cast it. Do you think it might work?

Looks like you only need 5 more cuts, so I'd recommend cutting:

I think Storm the Vault is very much a ramp card--both front and back.