Search your library for a basic land card, reveal it, put it into your hand, then shuffle your library. You get (two energy counters). 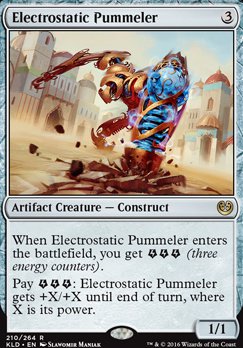 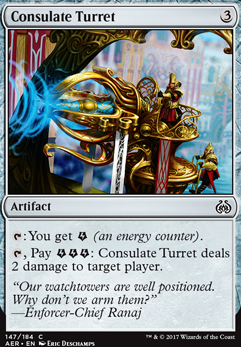 TriusMalarky on Energy Colors in Pioneer

One of the biggest advantages of energy, or more specifically the Attune with Aether and Aether Hub package, is that you have 8 cards that help you get all your colors.

You can go heavy on and splash and for the more powerful interaction.

You can also use cards like Gilded Goose , or Sylvan Scrying to get Hub, or Sylvan Caryatid for more fixing.

You also get Fabled Passage .

Technically, you only really need 14 red and 14 black sources to be able to run any single red or single black cards(unless they're both red and black). Aether Hub plus Attune would be about 5 in my math, you get Fabled Passage for 4 more, plus 1-2 each Mountain and Swamp. That'd be about 10. Then, it's not hard to run 2 triomes(the RUG and BUG ones), then some splash duals.

That'd already get you to about 19 lands total and about 14 green and 14 blue. Add one island, one forest, and 3 green blue duals, and you have a 24 land perfect manabase for 4 colors. Only downside is you have 6 taplands, but 4 of those are only tapped in the first 3 turns of the game, and all of them get you 3-4 of your colors.

I say, you can run Lightning, Path, Seize and another red card and be perfectly fine to add Refiner, Hydra and more, and it won't cost you much at all. Disclaimer is that it is only possible due to the fact that you're running Aether Hub, Pioneer can't support 4 colors normally.

The kaladesh block was when I first really got into magic and I would like to make a deck themed around energy for it. My problem is that I don't know what colors to play. I was thinking for sure blue and green because Rogue Refiner is the best energy card in the game based of it being banned in standard. Green is also great because it gives Attune with Aether and Bristling Hydra But then I'm not sure whether my third color should be black or red. Red gives access to damage based sweepers like Flame Sweep and removal like Harnessed Lightning , but black gives thoughtsieze and good removal like Fatal Push and Assassin's Trophy . I'm not sure where to go here so any color help or suggestions would be much appreciated.

tpmains on Should Tutors Have Additional Effects?

I don't think that tutors of any kind should have extra benefits. The best example of this would be Attune with Aether. This simple card let you tutor up a basic land, the most fundamental part of Magic, and it still got banned because it had the extra benefit of 2 energy. If you give players extra stuff on a card, they will abuse it. It makes them too powerful.

Grubbernaut Great suggestion, totally forgot to add in Fabled Passage , had to adjust mana base with more basics for both that card and Attune with Aether 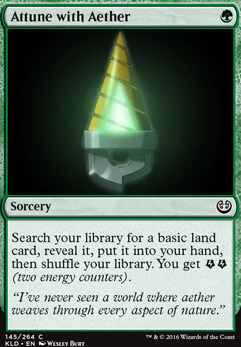