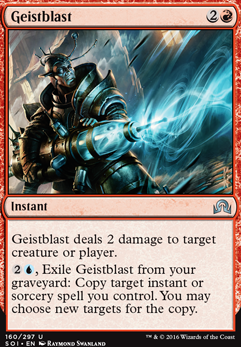 , Exile Geistblast from your graveyard: Copy target instant or sorcery spell you control. You may choose new targets for the copy.

Non-spell effects should be replaced with spell effects, as the latter trigger off krark. I'm referring to taking out cards like Whirlpool Warrior and Geistblast , swapping with Reforge the Soul and Twincast or Repeated Reverberation

For rituals, may want to add in Jeska's Will and Mana Geyser ? You can storm-copy them for mana as an alternative to Kydele. They also synergise with Reiterate , which I think you forgot to include.

Jeska's Will impulse draw will help you in your storm turns, and with Krark, you can even turn the impulse draw into real draw by returning the spell to hand!

On that note, you may consider Birgi, God of Storytelling Â Flip. I've made a storm deck with her and either side are valuable for storm turns, either because they provide mana or because of the card draw.

I saw Sakashima of a Thousand Faces in your sideboard. You should add it in. With Krark and Krark Thumb, you have a high chance to BOTH copy and return the spell to your hand, leading to insane logistical nightmares but a definite win.

As for wincons, I would remove Ignite Memories , at 5cc, it is tight on mana and for non-storm turns, its a dead card. I would rather Lightning Bolt infinitely copied or Grapeshot as these two also serve as spot removal in the early turns.

For Recursion, Bala Ged Recovery is a good MDFC that I'm always happy to have in my hand at any point of the game.

In terms of general gameplan, I think simple cantrips may be required to smooth out draws. I would lean onto the red ones like Faithless Looting for effciency and 2nd use, Thrill of Possibility for instant speed, Cathartic Reunion for 3x draw, especially if copied.

I've always tried to brew Kydele but there's the limitation of colorless mana as well as needing to give haste. Hall of the Bandit Lord and Expedite should help here, the latter also acting as a cantrip anyway.

Only One May Stand!

hkhssweiss Thanks for your compliments and inputs. Am glad you like the deck. It is a rather complex deck to pilot and even as the creator of the deck, I find the the myriad of decisions to make and the endless combinations of mana to float, mind boggling.

I'm currently running 15 Tutor spells and Conflux , at , may be a bit too clunky to use.

This deck is build to function without Ramos in play. In fact, majority of the games I won with this deck, didn't see Ramos hit the battlefield even once! My personal take is that Conflux would be more suitable in a deck that focuses on putting +1/+1 counters on Ramos en-route to victory and isn't running as many tutors as I do.

The hidden MVP in this deck, is actually Intuition . Being an instant, I can cast it at the end of opponent's turn, the turn before I plan to combo off. I often tutor for the following cards, which regardless of what card the opponent chose to give me, will usually result in the same outcome:

Let me know what you think and keep the suggestions flowing pal! Cheers.