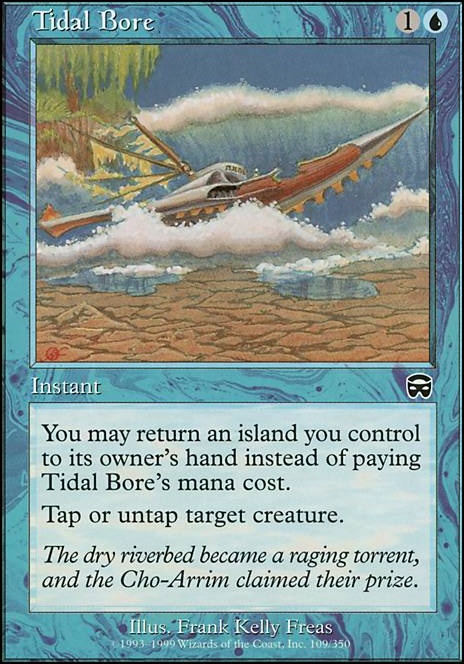 You may return an Island you control to its owner's hand rather than pay Tidal Bore's mana cost.

You may tap or untap target creature.

shardstar- I think I can answer that question for Crash. I have a version of Tatyova as well but with more of a control focus rather than pure combo. But both decks win in the same way. Pretty much the goal is to creat infinite mana in one of two ways. The infamous drake combo which you surly know and then the lesser know Tidal Bore combo. The Tidal Bore combo needs the following: Tatyova, Benthic Druid, Mystic Sanctuary, Walking Atlas(or any creature with the same effect) and ofc Tidal Bore. Once infinite mana has been generated you want to draw your deck. There are many different options to do this but the end goal is the same. Draw into another Archaeomancer like creature or Mystic Sanctuary assuming you don't already have two. Next up is Ghostly Flicker if you don't already have it. Compulsive Research is the actually win-con here. With Ghostly Flicker and 2x Archaeomancer and infinite mana you are able to make everyone draw their decks and win!

I am not crash and therefor can not tell you exactly why they took out Displace but I assume it was to make space for something else. And taking it out was possible due to there being a second combo with Tidal Bore.

Adventuring Gear, while a valid and more of a fair way of winning it would only kill one opponent per turn, giving the other 2 at the table plenty of time to find a way to deal with your combo or just kill you instead.

Sorry Crash if I stole your thunder :)

Hi, great to see a cEDH primer. I am active in the PDH (Pauper EDH: General has to be an uncommon creature, the 99 have to be commons) community and Tatyova is there one of the most dangerous threats, understandably. I just wanted to share my Tatyova PDH Combo list as it has become so strong, that regular EDH tables dont wanna see it anymore and my local cEDH people are basically the only ones that accept her^^ But it cant quite compete on that level of course. But its surprisingly close.

It has 2 main combos:

I was interested in cEDH Tatyova and was about to have a look on builds for her there. Glad to see your approach here and such a well made primer.

Greetings from another Tatyova fan!