Sakashima of a Thousand Faces

The "legend rule" doesn't apply to permanents you control. 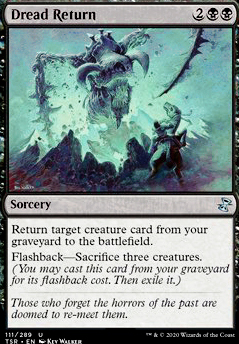 Sakashima of a Thousand Faces Discussion

Hey! I just read through your decklist and thought of a few things you could add/remove. I'll start with the potential cuts:

@IzmAYAYA Hey there! That situation has never actually come up for me in a game. I read through some of the rules on the gatherer and this is what I found:

" Spark Double isnât legendary if it copies a legendary permanent, and this exception is copiable. If something else copies Spark Double later, that copy also wonât be legendary. If you control two or more permanents with the same name but only one is legendary, the âlegend ruleâ doesnât apply."

I'd assume that Sakashima of a Thousand Faces would interact similarly when copied. So I think the answer to your question is that you could get 5 Yuriko, the Tiger's Shadow !

I like the flavour here, pretty fitting. May I suggest Progenitor Mimic as an additional very powerful clone? Also, how about Moritte of the Frost to be able to copy non-creature permanents? Finally, Spitting Image is just busted with Kakashi. And considering the fact that Kakashi should be able to copy himself, Sakashima of a Thousand Faces and/or Helm of the Host seem great.

I'm personally a big fan of Steel Hellkite . Solid removal in EDH. Sure you run into it dying to removal or being countered or whatever, but honestly the threat of removal is real for all permanents. I don't play a game with the mindset of fear; I play the game to have fun. And besides, not every single opponent runs plenty of removal, and not every single opponent immediately has said removal at their disposal.

Argentum Armor is super based, if you can get it out. Works wonders in ramp decks.

Caged Sun is great for ramp, especially in mono-white.

Contagion Engine , but it requires a lot of setup to get true value out of.

Duplicant is great, again, for removal. Fits in any deck, exiles any creature and can potentially be massive if you exile something such as The Ur-Dragon

Eternity Vessel is super based in mono-white. Run the full gambit of fetch lands and crack them when you're life total is too low. Use in response to it's inevitable removal for some last-second value.

God-Pharaoh's Statue will shut down combo and tempo players in their tracks.

Gonti's Aether Heart can land you infinite turns if you set it up right. You need to Ensoul it, then you want to clone it. You can use Spork Double (misspelled on purpose lol), Sakashima of a Thousand Faces , Mirror Gallery , Sakashima the Impostor or some other spells to do so. Once you're online, do something such as Followed Footsteps , Progenitor Mimic , Rite of Replication . If you're using Progenitor Mimic , you're already in green. So use token-doubling effects such as Doubling Season . You can even bypass all of this for Mechanized Production and Mirror Gallery . Regardless, once you're online you'll be able to exile one and take an extra turn, make another at the beginning of your upkeep and kick off another one. Boom, infinite extra turns. But again, lots of setup.

But I think, of everything, my pick is Mindslaver .

Hold up the mana and use it as the nuclear option. Nobody wants to mess with the man (or woman) who has their finger on the detonator.

Just a comment on the theme, I really like it, but have you considered also trying the theme with Sakashima of a Thousand Faces as commander? I know it would restrict you to blue, unless you partnered him with another commander, but I feel like the clone mimic of Sakashima fits Kakashi better (solely in my opinion). If you're attached to your colors you could even partner him with Tana, the Bloodsower .

Not sure if you're still running this deck but Sakashima of a Thousand Faces is a great upgrade over Ludevic imo.

Identity Thief is another way to combo with Medomai but you need something like Brago, King Eternal or Thassa, Deep-Dwelling to flicker the thief before end of turn or you'll lose one of the Medomais. Brago and Thassa have great synergy with Ilharg too allowing you to keep something he cheated in permanently if you like.

Brago also creates an infinite combat loop with Aurelia, the Warleader who I would put in any RW combat centric deck anyway. Helm of the Host is another infinite with Aurelia and Blade of Selves on Medomai with Sakashima of a Thousand Faces in play is very powerful.