Parley â : Each player reveals the top card of his or her library. For each nonland card revealed this way, add to your mana pool and you gain 1 life. Then each player draws a card.

Selvala, Explorer Returned occurrence in decks from the last year 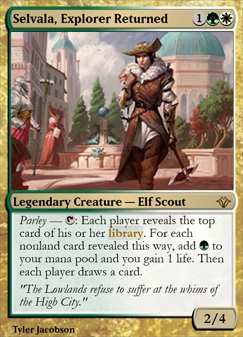 Rin and Seri
by Mach30

enpc on What are your favorite underused, ...

I really like Selvala, Explorer Returned in green/white/X decks (not just as the commander). She's just a good all-rounder. Good blocking potetial, card draw (albeit for everyone) and mana ramp, what's not to love.

Based off of Azusa, Lost but Seeking and Selvala, Explorer Returned

: Each player may reveal the top card of their library. For each land revealed this way, put it into its owner's hand.

In: 1. Faeburrow Elder 2. Sylvan Library Selvala, Heart of the Wilds

griffstick on Suggestions for a New Commander

Have you tried building a token deck yet. They are lots of fun. I run Selvala, Explorer Returned as my token deck commander in this token deck