Splinterfright's power and toughness are each equal to the number of creature cards in your graveyard.

Jarad from Subway
by KilroyBole6 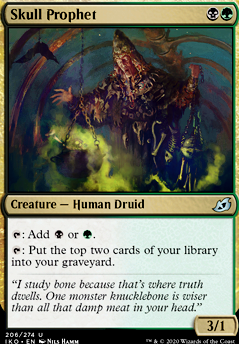 thanks for the suggestion! I did not know of this card but I have reviewed similar cards (e.g. Boneyard Wurm, Splinterfright). I always found them to have a relatively low floor. On turn 4 the card is mostly dead when I don't draw my self mill and at the later turns it is outclassed by the other threats in the deck.

Love the deck,looks super fun. I haven't played much reanimator so I don't know what plays well but have you considered Gravebreaker Lamia or Splinterfright?

Tbh, I didn't have a chance to properly play this deck yet. So it's kind of mind boggling for me someone went ahead and analyzed this deck so thoroughly. Thank you.

1) The choice of amount of mana fixing in this deck purely comes from tappedout's handy "Draw hand" feature. Means I drew a hand and told myself "Do I have the correct mana to possibly do something with this hand?". The main problem here is having a virtually pure Golgari deck with a commander that also needs . So I just added as much fixing until I felt most the hands I drew allowed to have a decent start in the early game. If you say there are too many taplands and I should add more basic lands and add as more fixing as is needed, I'll look into that.

2) Bojuka Bog can definitely go in there. Thanks for the suggestion!

3) Yeah, I thought about that too. Definitely gonna put in some more ramp next time I revise this deck.

4) Splinterfright is already in the deck? Are there any other cards you could see being replaced with better cards?

5) As I said, I didn't have a chance to properly play this deck yet. But the idea was mainly to make use of Karador's ability to play creatures from my graveyard. Even if Karador gets removed, in the best case scenario he will always only cost 3 CMC. Also he enables to kind of treat my graveyard as a "giant hand" and milling myself is basically the same as drawing cards. So there is also a kind of control aspect to it, why I definitely would consider to put in more cards like Cavalier of Night or Ambush Viper, as Malsorn suggested. I have no idea how this will play out though, maybe the main win condition may actually be something else, if that's the case I can accept the idea of switching to another more fitting commander.

Thank you very much for giving me your feedback!

Freed from the Real feels limited here with only two creatures that have tap abilities, though. I get the infinite mana potential, but it still feels difficult to pull off with the number of cards you need to assemble.

Ashiok, Dream Render "draws" you four cards a turn and blanks opponents' graveyard strats. Plus by diversifying your threats across a greater distribution of permanent types, you get more value out of Muldrotha.

Is Daring Apprentice or Voidmage Prodigy better than running Arcane Denial with this setup?

Splinterfright is smaller than Lord of Extinction, but it gets through easier with trample and "draws" you two cards per turn.

And of course, Syr Konrad, the Grim.