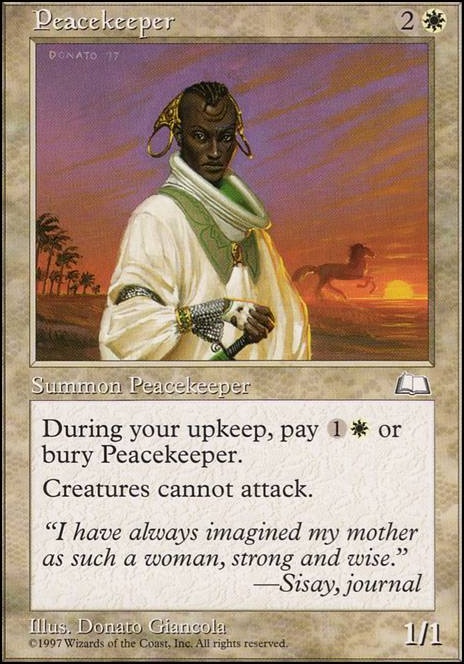 At the beginning of your upkeep, sacrifice Peacekeeper unless you pay (1)(White).

Peacekeeper occurrence in decks from the last year

Love the originality of using a relatively unheard of commander. I see your creature count is on the low side. I have a number of suggestions that would help with the control theme. They are:

Any or all of these cards would help defend against all sorts of play styles. Not sure what you have going for a wincon but Elesh Norn would make death by combat a lot more viable. That and she shuts down a lot of token strategies.

Have you considered The Elderspell to lump all of your counters onto a single PW then ult them?

Beyond that, I'd invest in some more board wipes, particularly Toxic Deluge and Wrath of God over Descend upon the Sinful .

I've found effects like Peacekeeper and Magus of the Moat to be helpful in decks like this.

CNobre I have updated the list after the full modern horizons spoiler. For the cards that your suggesting:

Aven Mindcensor This card is so good. It is insane how much this single component card will shut down other decks before they get going. I can flash this in in response to fetchlands, tutors, and many different search effects that highly restrict my opponents ability to play their deck properly.

Suture Priest Is a two sided coin that prevents my opponents from attempting to go to wide and take over the board with creatures. It also prevents any infinite combos that use creatures moving back and forth on the battlefield. Forcing my opponent to find an answer to suture priest before they can try to go off. Right now I agree it is one of the weaker card options but it has stalled so many games that I can never find a better replacement.

Giver of Runes I think you are mistaken on this cards effect. If it was protection to any permanent this would be better than Mother of Runes but sadly it only gives your creatures protection. I can't use it to protect my auras/epuipment. In fact giving my creature protection from white causes any of my auras to fall off said creature instead. I don't want to many of these effects as they are counter productive as keeping my creatures alive is less of a early game strategy and keeping the board clear of threats is my main priority for the first half of the game.

Kazuul, Tyrant of the Cliffs This is a great budget card to cards like Ghostly Prison , Peacekeeper , Crawlspace and Koskun Falls . In my opinion the card does very little as I don't need to prevent my opponent from attacking if I just kill all the creatures before hand. I opted for mass removal and targeted removal over taxing my opponents because these kind of cards make people want to attack you after they've dealt with them. With removal I can use it as leverage to keep people from attacking me, but also I can use them to make allies. When someone gets to strong and another player offers a truce I can use my removal to help make alliances with other players.

Chandra's Ignition Now this also refers to all board wipes as you mentioned them collectively. But this particular card is so good I had to single it out. The way this card works is I can target my general and because the card has her deal the damage it turns into a card that wipes the board except for my general. If Im playing this card I either have very little else to lose on the return or I am in a position where I can't be stingy about losing my board and I can use my superior draw/top deck to establish boardstate before my opponent can recover. It has won me so many games as I always recover my board state faster through the Monarch token and cheap removal options that my opponents cant find answers to.

I am reaching my limit of characters for one post and will continue in the next one.

Long may she reign *Optimized*

Thank you! I don't have a Marchesa list, but all of my decks have many ways to stay alive. Even my Naya lands-matters deck runs Peacekeeper . xD

Long may she reign *Optimized*

Politics are very important for this strategy. I'd highly recommend Null Chamber , as I see it as the pinnacle of alliances, turning off two players' commanders whilst teaming up with another. Debt of Loyalty is also fun, as well as Tragic Arrogance . For what you're trying to do, Mystic Barrier seems to be the best of options. Solitary Confinement and Worship are good for staying around, too. Peacekeeper is also hated and helpful.

A little control goes a long way, I'd maybe recommend putting in one or two of the following humans: Grand Abolisher , Magus of the Disk , Magus of the Moat , Palace Jailer , Peacekeeper .

Also I think 34 lands in a little low, how does the deck perform currently? Are you missing land drops?