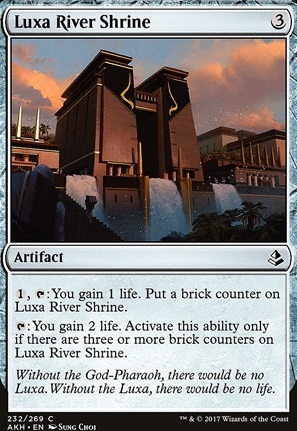 : You gain 2 life. Activate this ability only if there are three or more brick counters on Luxa River Shrine.

Obosh from small supply
by soapomancer

Minihorror227 I have all five types because I have full art ones that are all the same theme. I also went and added Ruthless Invasion to add a opportunity to attack for my six 3/4 pests wile also not having to use red mana. (I buff them by imprinting Chief of the Foundry to Soul Foundry) I replaced that Burnished Hart for another Palladium Myr. I asked for Expedition Map and my game store did not have it, but when I do have it I will replace it with Luxa River Shrine When I get my hands on those urzas lands I will replace it with my Radiant Fountain.s. If you think I should do something else please tell me! Keep in mind that I don't need too much mana, Mage-Ring Network does a great job at casting things like Darksteel Forge when I need too. Speaking of Darksteel Forge that's the only card that stayed in the deck after I first made it, but thanks to people like you that saw a deck with a Darksteel Forge and random junk like Will-Forged Golem and Neurok Replica, then told me to shape it into the deck it is today. Thanks for all of the help!

Pride Guardian and Seal Away defend well against aggro decks. Mother of Runes is a great defensive card for your sideboard.

If you want to be a bit more aggressive, replace the Inspiring Clerics and a few Knight of Meadowgrain for some Glory-Bound Initiates and maybe some Knight Exemplars and Consul's Lieutenants.

I think Cathedral Sanctifier and Pride Guardian are usually better than Ghost-Lit Redeemer.

You could run a Luxa River Shrine for some extra lifegain.

Okay, so this deck looks like it has potential. If I were you, I'd take out Gift of Paradise and move the Haze of Pollens to the sideboard. I'd put in another Polyraptor and two more Forerunner of the Empire to make your combo more prominent.

Then I'd recommend making the mana-base more efficient by taking out all the Stone Quarrys and Tranquil Expanses and replacing them with Inspiring Vantages and/or Scattered Groves and/or Sunpetal Grove. The Rootbound Crag is good. Maybe take the Evolving Wildss out and put in another and maybe two Sheltered Thickets.

Renegade Map and Luxa River Shrine can go. If you're looking for mana-fetching or life-gain, look no further than Ranging Raptors and Deathgorge Scavenger. Carnage Tyrant is good, too, if you have the money.

As far as sideboarding, Dinosaur Stampede is good, I'm not a dino guy so you'd have to make your own, but I'd suggest some more removal in your sideboard.

I hope some of these suggestions are useful. Good luck. Try to sleeve this up and play tonight or next week at your LGS. You got dis.

Of Life and Death - Zombie Deck

You should drop all non zombie creatures and Luxa River Shrine for some more removal. Impeccable Timing Cast Out Ixalan's Binding Essence Extraction are all good.

Thanks for the advice! Unfortunately it will be next Friday before I can test at an FNM, but I'll give an update when that happens.

I've considered ditching black, but Gifted Aetherborn and Fatal Push seem too good to pass up. If I have a drawing issue I might resplash blue for Search for Azcanta  Flip, but reducing the land does make it tempting.

Luxa River Shrine might fit the bill when it comes to not lifelink life gain, while staying standard. Authority of the Consuls also helps in that regard.

Hopefully having 4 Crested Sunmare will be enough to keep them in the board, and if I have two they all have indistrucable (I think). If this ends up being an issue, splashing blue for negate will help.

Again, thanks for the advice! I'll implement as I test. Hopefully this ends up being Deck to be feared, as long as I avoid Rampaging Ferocidon...