If you control a Swamp, you may pay 4 life rather than pay Snuff Out's mana cost.

Snuff Out occurrence in decks from the last year

Gonti, Thief of Souls and Knowledge
by grievances 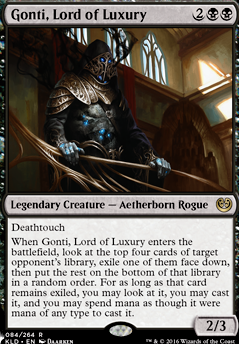 No one ever sees Dispatch or Snuff Out coming. Iâve had multiple instances of people asking me if they are actually real cards.

Snuff Out seems broken in Oathbreaker, especially alongside commanders like Sorin, Vengeful Bloodlord that gain you life. I don't know though, maybe Wizards will ban it.

Okay, I see! Kind of like using Snuff Out as a signature spell in Oathbreaker.

There's a flip liliana in the form of Liliana, Heretical Healer Â Flip which flips into a planeswalker which can get value with her -X. Reanimating zombies from the graveyard to add onto the zombie tribal sub-theme. I'd play Ayara, First of Locthwain in the 99 to add more synergy with the deck with her Sacrifice theme. you could also add a discard sub-theme with cards like Geth's Grimoire and Liliana's Caress al0ong with the Snuff Out from one of the duel decks. everything has a image of liliana for the exception of Geth's Grimoire.

Hi! Sultai_Sir here. I love this deck! Here are some suggestions:

Displace, Ghostly Flicker, etc: You're running a bunch of clones, and if you add in a blink subtheme, you can copy utility creatures in the early game and then blink them back as Elesh Norns and Void Winnowers.

Clone Legion: From a purely Vorthos standpoint, this card seems like the biggest flavor win you could ask for. From a playing standpoint, copying a board of big bois just feels so good.

Snuff Out, Pongify, etc: You're really low on removal. this would help your deck get rid of problem cards that you can't deal with

I hope this advice helps, and as always, happy tapping!

I personally wouldn't include Grimgrim in this deck. I see where he could be an interesting include for some people. I just don't want to spend 5 mana on a card that does absolutely nothing until next turn. And when he does do something, he simply destroys a creature.

I like efficiency. So if you're looking for more removal, I'd rather use cards like Force of Despair or Snuff Out in place of him. It's not likely he's going to stay on the board very long in my meta anyways. I'd rather spend 5 mana on something like Conjurer's Closet and kill their creature for free. I'd actually rather spend my Mana on more removal/protection to get into the late game.