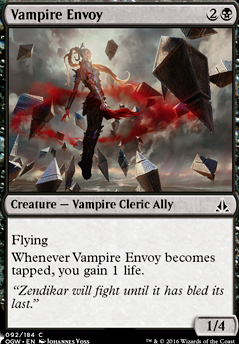 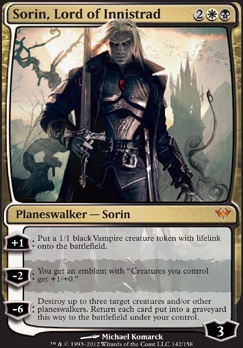 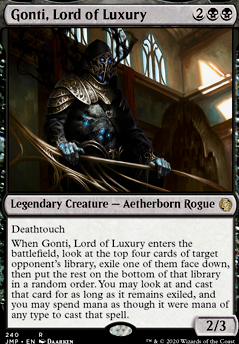 Son of Yawgmoth
by nbjblv 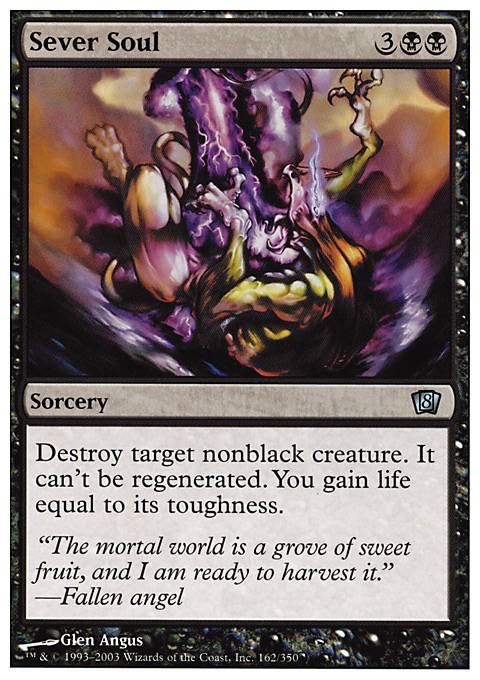 you have to pick a theme to your deck, before we can help you. are you going for milling? control? discard? deathtouch? and more. it looks like you got a bunch of commons and a few uncommons but thats about it right now. i would suggest you look up some decks in your color in the pauper format, which would be near perfect for the type of cards you have. pauper format only uses the common cards. your Vampire Envoy would combo well with Zulaport Chainmage and would fit in the pauper format. Blood Tribute also works with that card for the kicker cost. to get you started

Ayli, Eternal Pilgrim and Drana's Emissary might be solid additions to this deck. Drana's Emissary looks to be a particularly good fit. In the 4 mana spot, I think you're correct that Kalitas, Traitor of Ghet would be better. I love Cliffhaven Vampire , but Kalitas, Traitor of Ghet is just sooooo much better. Even Drana, Liberator of Malakir is pretty good. It doesn't necessarily hit the theme you have, but it's pretty good. It's a bit weak (power) for what you get, but Vampire Envoy is yet another card that would fit your theme.

Hope these suggestions help! +1 from me!

I pulled Vampire Envoy . Drana's Emissary is fine flyer with better static effect and the same CMC and I feel more sentimental about her :)

There are several cards that when I play don't show up. They just appear as a fully black card. I've had this happen Vampire Envoy , Oneirophage , Thundering Djinn , Spinehorn Minotaur , Fists of Flame , and Phantasmal Form .

Additionally, Champion of the Flame is registered as a 1 mana creature, and Oneirophage is put in as a 12/0, wen it should be a 1/2.

hejtmane on Edgar: are there any (no ...

We just built my son a tribal vampire commander waiting for some cards to fill in for mana. Vampires have a lot that stacks with Sanguine Bond add in Drana's Emissary, Cliffhaven Vampire, Gifted Aetherborn and a ton more with lifelink, Sanctum Seeker which with the token spam can get crazy add in Sorin, Lord of Innistrad and Bloodline Keeper  Flip and Olivia Voldaren to steal creatures as vampire and attack them with their own creature. That is not even counting Vampire Envoy