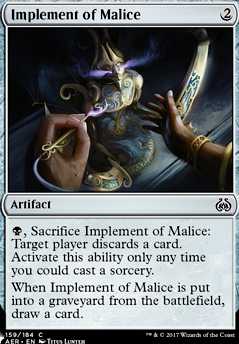 , Sacrifice Implement of Malice: Target player discards a card. Activate this ability only at any time you could cast a sorcery.

When Implement of Malice is put into a graveyard from the battlefield, draw a card.

Glissa, the traitor
by Cheshireheir

Stop touching my hand!
by RangersGuild

Abbot of Keral Keep is at most a 2-of in a deck with so many relatively expensive spells as this one (you'd rarely want to play it turn 3 in the hope of hitting a 1-mana spell, right?). 2 more Thoughtseize would be pretty good, though.

Implement of Malice... I suspect that it is too expensive in mana, but it trades for a card from opponents hand, replenishes itself, and if you could find a little bit more artifact, it could enable delirium, so you could play Whispers of Emrakul instead of Wrench Mind.

Noxious Gearhulk also fits the description: You get a decently sized creature, kills another creature, and gets a bunch of life. Only problem is the cost (at 6 mana it's probably over the top of the curve). Actaully, if your curve went that high, you could add the titans too.

Thanks for the comments, glad you like the deck!

I didn't make many concessions for price with this deck so other than swapping in the Vraska's Contempts, I don't think you need to change anything up for that reason. That said, I haven't done much testing since Dominaria came out so it's possible there are places to tighten up the list. Cast Down is a pretty easy switch for Walk the Plank, for example. Of the 50 most-played creatures in Standard, the only creatures it can't kill that Walk the Plank can are Kari Zev, Skyship Raider, The Scarab God, Pia Nalaar, Lyra Dawnbringer, Ghalta, Primal Hunger, Gonti, Lord of Luxury, and Shalai, Voice of Plenty, and having to deal those using our other removal spells is probably well-worth Cast Down's upgrade to Instant speed.

To answer your specific questions:

More Torment of Hailfire: I'm running only 2 because I don't want to draw this card until later in the game. It's pretty bad with a low X-number and since we don't have ramp, we need a lot of turns of hitting our land drops before it's worth casting.

Duress: No, this card is great. You board it out sometimes but most decks play a number of important noncreature spells and being able to peak at your opponent's hand in the early game is very important for planning out sequences.

Dreamstealer: a fine card but it isn't a replacement for Duress and doesn't generally work with our artifact plan.

Dire Fleet Poisoner: I'm not very impressed by this card in our deck. You could play it and it might be fine, but it doesn't really do anything we can't do in other ways.

Sword-Point Diplomacy: I've tested this a little and have been generally unimpressed. Your opponent just has too much control.

Gifted Aetherborn: already in the sideboard, definitely better than Dire Fleet Poisoner in this deck. The life gain and extra point of toughness are really powerful against aggro decks.

Heartless Pillage: I could see this swap, but I really value being able to cycle away discard later in the game. Heartless Pillage has higher upside than Unburden but the fail-case is pretty bad. I'd say this change is up to you.

Treasure Map  Flip: I've done extensive testing of Treasure Map in this deck and I do really want to include it, but I want all our other cards more. You especially can't swap it out for Renegade Map because Map is why we get to run so few lands and Treasure Map is too slow to make up for dropping even lower. If you can figure out what to cut, though, I say go ahead. The obvious choice would be Implement of Malice, but then we drop below our critical level of forced discard, and everything else serves critical purposes. There's a chance that Wall of Forgotten Pharaohs is just too cute and we'd be better served by dropping Treasure Map on turn 2, but then we're setting ourselves up for really bad game-1s against aggro.

The Eldest Reborn: Might be fine in the sideboard for matchups against hexproof decks if those are a problem in your meta. Otherwise, it doesn't have all that much synergy with our deck. I could definitely see it playing an important role in a different discard deck that wasn't leaning into the artifact-matters theme.

Cruel Reality: Kinda the same thing as The Eldest Report, except 7 mana is a lot for this deck. We'll get there eventually, sure, but not until turn 7 at the earliest, at which point I'm concerned that Cruel Reality is just too slow of a finisher. I'd probably rather just run more copies of Torment of Hailfire, which gives us way more immediate value and can easily just win us the game on the spot. Cruel Reality makes more sense in a Golgari ramp deck that wants to stick in on like turn 4 or 5 so it can start nugging the opponent during the development stage of the game.

You'll want Vessel of Nascency as it fills your graveyard, essentially letting you draw 4. Also, Tezzeret's Touch is ridiculous in this deck as you constantly can cast the artifact and the enchantment each turn, giving you recursion effects for Metalspinner's Puzzleknot or even Implement of Malice

like that deck, I tested something similar. My version had -4 electrickery and -4 harvest in maindeck. Instead i tried to splash for gurmags -> 2 swamps instead of mountains. then +2 Gurmag Angler, +2 Mycosynth Wellspring, +4 Lightning Bolt.

Funny deck, really challenging to learn how to play it correctly :-)

PS: Need more testing, not sure with atog, maybeboard is Implement of Combustion, Implement of Malice and Nihil Spellbomb for sideboard

I went with Implement of Malice over Doomfall, half because Implement draws us a card and half because it has much stronger synergy with the deck. We need a critical mass of artifacts for Herald of Anguish, plus it's nice having another source of Revolt to supercharge Fatal Push. We can also board in Hour of Glory to deal with Hazoret or TSG.

That said, Doomfall isn't a bad choice for this deck. I wouldn't fault you for sticking it in over something else.