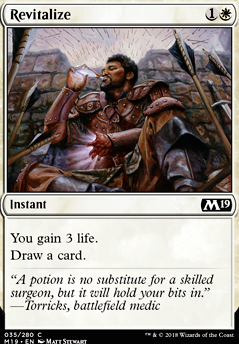 Revitalize occurrence in decks from the last year

The Lost Boys
by harisBROODSTAR 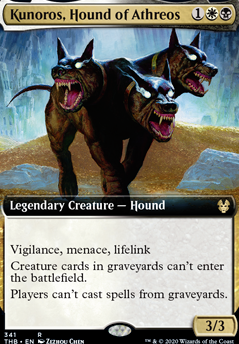 The Big Three
by ArcaneFire

TriusMalarky I plan on spamming 4/4 Angel Tokens with Anointed Procession and Angelic Accord and Resplendent Angel.will allow me to have a 4/4 angel token each turn with Chaplain's Blessing and Fountain of Renewal with Revitalize and Bishop of Wings. Resplendent Angel costs just as much as Angel of Vitality, and is a 3/3 without needing to be over 25 health for a 4/4 of Angel of Vitality. Chaplain's Blessing is the best mono-white lifegain card for 5 health for 1 mana.

Any advice would be appreciated; especially if you know of good ramp for mono-white!

I plan on running Anointed Procession with Angelic Accord and Resplendent Angel as a help to win with a bunch of 4/4 token angels. I also have Queen's Commission that pairs with Anointed Procession. But if this combo doesn't play out as it should, I can just keep on casting angels and fighting with them.

I have Oketra's Monument for my creatures, basically a 3rd turn ramp spell. I also have Pillar of Origins for angel ramp.

Lots of health-gain cards, especially Ajani's Welcome, Fountain of Renewal, Revitalize, Chaplain's Blessing, not to mention my angels, and white vampires, with lifelink.

Maybe if you plan on running more white cards, Vampire Nocturnus would be replaced with Mavren Fein, Dusk Apostle... Depends on your total manabase use of white but there are some great white cards out there. I would also replace Dusk Legion Zealot with Revitalize, which also uses up some of your white mana.

Or you could instead have Revitalize!