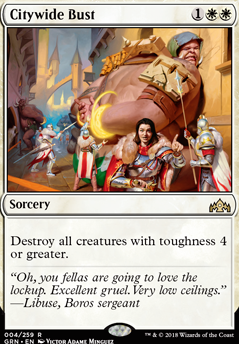 Destroy all creatures with toughness 4 or greater.

Citywide Bust occurrence in decks from the last year

$15 Blinking Wizards (blink and you'll miss it)
by silberwasseraron

We will not Falter
by SwordsofSanghelios

Arahbo, Roar of the World
by AUMEN0

I think kengiczar might've missed that your deck is mono-white ^^ Don't play Citywide Bust though, it's a horrible card(!) unless your local meta only consists of Gruul and Mono-green aggro. And even then there are probably better options.

If you're making a low-to-the-ground aggro deck, Declaration in Stone is good. It's completely unconditional compared to cards like Seal Away , Glass Casket and Baffling End and it doesn't leave an enchantment on board, that can be targeted by Abrupt Decay , Vraska, Golgari Queen etc. It gives your opp a clue, but you should be beating them before that becomes relevant.

Banishing Light is the cheapest catch-all in white, but against G/B/x decks it has the same "3 cmc or less" problem as the ones mentioned above.

Conclave Tribunal is another Banishing effect that gets better the wider your deck goes.

Citywide Bust is a really good call, can you clarify why Lightning Helix and Bile Blight lets me filter away excess land? I'm running a fair number of black duals already but getting double black in a mostly white aggro deck for Bile Blight seems greedy.

Depending on your deck you can use Citywide Bust which destroys all creaturs with power 4 or greater.

If you want spot removal then something like Seal Away or Chained to the Rocks are good.

Infact Citywide Bust pairs well with cards like Lightning Helix or Bile Blight which really allows you to filter away excess lands with Smuggler's Copter . It's a great card if your willing to buy some kind of dual lands for either Black or Red.