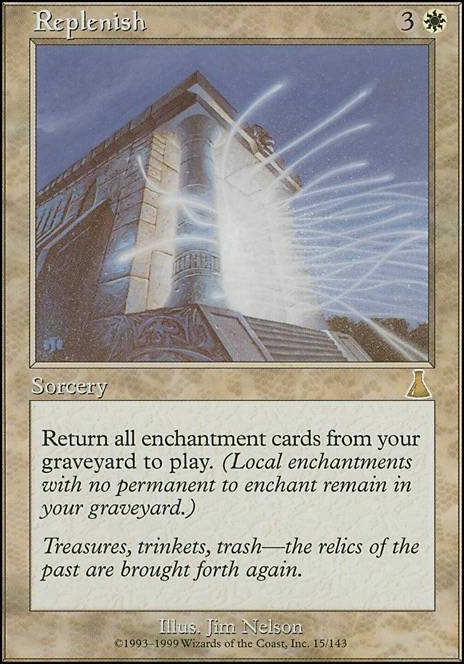 I want a Big Hug
by Jake_Wakerley

Greater Auramancy, Elspeth, Knight-Errant, Avacyn, Angel of Hope, and Soul of New Phyrexia are all ways of keeping your shrines protected.

Also, Starfield of Nyx, Open the Vaults, Sun Titan, Faith's Reward, and Replenish are all great ways to recover your shrines from your graveyard.

It looks, to me, like you need to focus a bit on your chosen strategy. It sounds like, with the pillowfort strategy, we're going to sit back and be more of a control deck and wait for the right moment to pounce. That in mind, here's what I would do...also leaving room for other suggestions, or some flexibility in case we would really want to keep some of the proposed cuts.

Cuts: Blood Tribute (not enough vampires) , Replenish & Greater Auramancy (not enough enchantments, though we could change this), Serra Avatar (no evasion), Vindictive Lich (does not play into our strategy), Feral Abomination (this looks like filler), (Corpse Augur) (Not playing many creatures), Ajani's Pridemate (your deck isn't aggro, no evasion), Decree of Pain (too much mana)

Additions: Epicure of Blood (plays into the 'slow drain' the deck is doing), Griffin Aerie (gives a few spare bodies to block in case someone gets through the fort), Pristine Talisman (best rock in Oloro), Alhammarret's Archive, more countermagic and removal, or even planeswalkers.

I, too, have an Oloro deck, but it's different from what you want. Mine is a more aggressive deck, a Soul Sisters-inspired build. Oloro Sisters

thanks, ShiltonCDXX. As you can see I have decided to build shrines in legacy, I will probably change to modern, as I doubt this can survive there (just wanted an excuse to use Jokulhaups!), and for modern Calix, Destiny's Hand, Dance of the Manse and Idyllic Tutor will replace Vampiric Tutor, Replenish and Enlightened Tutor respectively. those were excellent choices!

As this deck is currently heavy on white mana, Jokulhaups will be replaced with Wrath of God or maybe Merciless Eviction in modern

Sorry for the delay in response. I like what you've got going here. Your change to Golos, Tireless Pilgrim is a good decision. O-Kagachi, Vengeful Kami

is thematic, but not very useful... or powerful for the overlord of a plane.

One thing to look into, you could really lean into the enchantment recursion suite. Replenish Open the Vaults and or Eerie Ultimatum.

If you leaned in hard enough/if it is possible, you could also run some self mill.

IF you did, I realize you would miss out on the whole Kamigawa theme, just some thoughts.