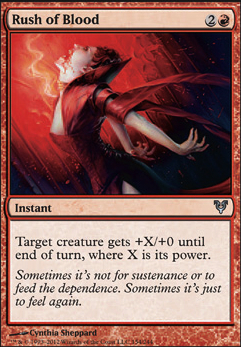 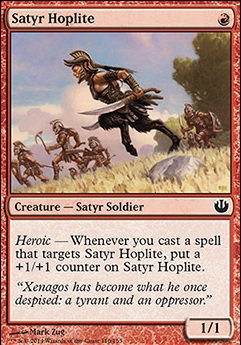 Hello I am tuning my deck towards utilizing Backlash, Reflect Damage, Delirium, Mirror Strike, & Glarecaster. I am finding frequently that their creatures are not big enough and would like to find some cards to increase the power of my opponents creatures.

So far I have Hatred, Rush of Blood, Overblaze, and although Tainted Strike doesn't make them more powerful it can make them lethal for less. I was thinking Coat of Arms?

Chameleon Colossus, Feral Animist, Heroes' Bane, Rush of Blood, and Wine of Blood and Iron are all options. Not good options mind you.

I feel as though ancient/once should enable backup shenanigans. Champion of Lambholt/Syr Faren, the Hengehammer/Wild Beastmaster perhaps?

Yeah man, this one is tough. It looks pretty good, although I think I may take out some of the artifact hate and instead put in more targeted pump spells. You have a lot of protection spells (although maybe lacking a Gods Willing) and double-strike spells, but you have few actual pump spells. Some of the spells I think can be upgraded, namely Boros Charm, Blessed Alliance, and maybe Balduvian Rage. These are good cards, but specifically with the indestructible spells, they are mostly used to counteract wrath effects which are not played in Tiny Leaders because of the mana cost restriction. You might look into Reckless Charge, Brute Force, Rush of Blood, Titan's Strength, and things of the like. I like the heroic package. Some of the other creatures you can probably cut without too much loss. Taking out Duergar Hedge-Mage and Electrostatic Field is where I would start. They just seem slow and kind of clunky. I could see Akroan Crusader and especially Dreadhorde Arcanist fitting nicely. This style of deck is entirely focused on what it is trying to do, so if you are interacting with the opponent it means you are detracting from the power of the deck, which is to apply pressure. Nice build though, I am not looking forward to facing it!

Crazy0Juice Rush of Blood is a very good include, but i have issues with the floor of it, if you have nothing else, it is just a way worse Brute Strength. the issue is that at this point there are a few to many sweet cards, and i dont realy know what to take out. i dont think Burning Prophet makes the cut, it was one of the first cards me and my friends talked about but i think all of the draw and scry already in the deck are enougth. thanks anyway for the input !!

Hey, nice list! I was also building a feather deck and something i think would be pretty good is Burning Prophet to provide additional damage and pretty good card selection with all the repeated casting and such going on. Another fun card that I like is Rush of Blood. It doesn't pump as much on its own but can get crazy paired with double strike. Just some ideas if you're interested.

2)You should probably cut the uncommons, things like Invert/Invent, Jace's Ingenuity, Rush of Blood(even though this card is super cool and I'm going to put in one of my other decks), Concentrate, Rise from the Tides, Butcher's Cleaver, Hero's Blade, Inquisitor's Flail, Vessel of Endless Rest, Illusory Ambusher, Smelt-Ward Minotaur, and Whirler Rogue. While these cards are awesome in the deck, they're a huge deficit to your budget and cutting them is 12 less cards. I've found that with a budget like this, it's best to cut to $0.15 commons. Will it be as fast? No. Will it be $10 or under? Yes.

4) As for specific cuts, here's what I'd take out(excluding the uncommons I pointed out earlier): Artificer's Epiphany: There are better draw spells out there; Contradict: Again, there are better spells; Depths of Desire: Generally, I dislike bounce, even in Red/Blue but this spell just isn't good, especially when you want to cast Shu Yun on turn 3; Enhanced Awareness: Way too expensive for the effect; Leave in the Dust: From your comments, it seems like you want to win faster, so I would cut these mana-intensive bounce spells so you can run cantrips, also Unsummon is $0.15 on SCG; Prying Eyes: yeah this card is just objectively bad in my opinion, even for a $10 deck; Repulse: Same thing I said before about bounce spells, the card draw isn't worth paying more mana; Scatter Arc: I feel like a lot of the bounce/counterspells are in this deck because they say "Draw a card" paying 2 more mana for a negate that draws you a card is not with it, you could do more with that two extra mana. Sweep Away: Yeah this is way too conditional to actually work out; Aether Tunnel: Yes I know you said you wanted to keep this, but playing it makes Shu Yun a huge target and it's budget intensive. Skygames: This enchantment is okay, but It's definitely not great, especially when compared to your other auras; Highland Lake and Izzet Boilerworks: Yes I know it's important to have mana, but running basics gives you more choices. That's pretty much all I've got for now on cuts.

In line with the OTKO strategy, you want to pump up your Boss and hit opponents for at least 21 points of commander damage. What this means, is that anything that grants less than +5 to it's power will not make the cut. Some suggestions:

Xenagos, God of Revels - Crazy synergy with your Boss and curves out really well. Drop Xenagos, cast your Boss in the following turns and have it grant haste and +6/+6 to your Boss, swing in for 24 Commander Damage!

Downhill Charge / Blazing Shoal - Free pump spells are great, especially since the CMC for your dragons are on the high side. You'd have plenty of "fat CMC" spells in your hand to remove for Shoal as well.

Surge of Strength - A hidden gem that is easily overlooked. It'll buff your Boss by +7/+0, making him hit for 26 commander damage if unblocked!

Rush of Blood - Simple but effective.

Berserk / Fatal Frenzy - Go BIG or go BROKE with them!

Kessig Wolf Run - To replace Skarrg, the Rage Pits as you need +X type effects rather than +1/+1.

Mirrorwing Dragon is a fun and "win more" card since you usually don't have sufficient creatures to benefit from the "cascading buffs" the dragon offers.

I always believe there's a Timmy in all of us. Some suggestions:

Natural Order - Transform mana dorks into big fatties. I do note there aren't that many green fatties in the deck atm.

Sneak Attack - Cause sometimes, 1 hit is all your need to steal the game.

Cream of the Crop - Given the amount of fatties you run, some top of library filtering may help.

Fatal Frenzy / Rush of Blood - Doubling the power is good, Quadrupling it is orgasmic. At worst, they serve as redundancy for Xenagos.

Seize the Day - Now that your creature is all pumped up, why not take an additional 2 combat steps for a mere cost of .

A none card related suggestion - The blue card links don't stand out against the green background. If you're interested, we can explore ways to alter the font color to make reading the deck list more conducive. Let me know.

Hope the above helps. Cheers!