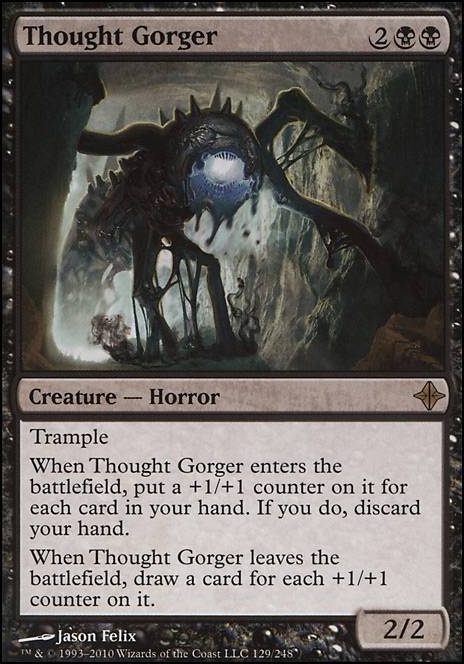 When Thought Gorger enters the battlefield, put a +1/+1 counter on it for each card in your hand. If you do, discard your hand.

When Thought Gorger leaves the battlefield, draw a card for each +1/+1 counter on it.

Breena, School of Counters
by budlaorf

Varolz is probably my favorite deck that I've built so far, but the ideal route is to go with a elf ball shell. Play all the dorks you can find because 1) they are very early mana ramp, 2) you can sac them to protect your commander, and 3) you can scavenge them when you're done with them (nice thing is the elves usually pay for themselves, float mana, sac and use it to scavenge). Don't forget Birds of Paradise

That is step # 1 for consistency mana to do crazy stuff. Step 2 is either consistent mill, or consistent tutor, or both. For the mill plan, best card to use is Mesmeric Orb . Get that turn 1 with soul ring, and you're going places. There are a lot of budget options to mill. On the other hand, with the tutors you'll be more consistent and basically turn into an one-turn-kill with either Phyrexian Dreadnought or Death's Shadow on your commander or something that has infect.

Cards to think about, as they have work wonders for me

Iâve reached an impasse and need your suggestions. Any you make will be valuable.

Iâve been...hoarding cards lately, ordering playset after play set of things to build with, and now that most of them are here I donât know what exactly to do with them. Iâm really in need of suggestions because I canât make a decision. Below is a list of cards that I have desire to make into something(s?);

Obviously I have more cards than this to supplement whatever the plan ends up being and I donât expect to fit them all together, but if you have any suggestions then shoot. Iâd greatly appreciate any ideas. Apparently Iâm a netherbeast who has developed the retardations and canât build a sixty card deck anymore...