Embrace the All Mighty Torpor Orb
by Kingconker

One Shot (Phage EDH)
by TheCardPool 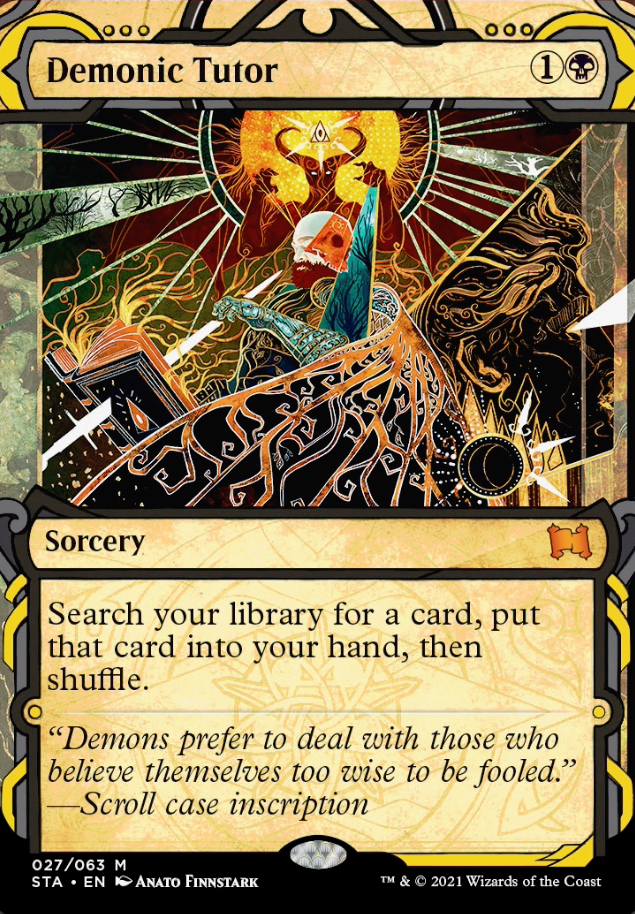 Daretti of the Staxx
by VFD

I replaced Torpor Orb with Dress Down.

Iggipa - Mystic/Cloud was never shot for enough to warrant and the cost reduction was negligible when youâre cheating artifacts as early as turn two. I wanted an additional line/redundancy, but it was unnecessary. I believe they were replaced Rebuff the Wicked and Torpor Orb. More protection, more stax makes Oswald a happy boy.

After a few weeks of playing at different stores I put Raven's Crime at 4 copies. Many games the opponent has lands on thier hand and only raven's crime and Funeral Charm get those in the graveyard. Funeral charm is best in a meta with Ragavan & Dragons rage channeler. Other than that it's lack luster. Castle Locthwain is great at 1 copy, the investment is pretty heavy, essentially you are committing 4 lands for the draw ability. Solid list. The only real suggestion is for the sideboard, Void Mirror for Tron and Cascade decks and Torpor Orb for any deck using Ephemerate

TheRileyMan525 on Animar is a meta crusher

I have an animar deck in my meta, and while it is very powerful, its not that hard to deal with. The most important in my opinion is to kill it on SIGHT. Never underestimate a lone animar. If you give it more thatn 1 turn, you probably lost. This isn't that hard though, as he does start as a 1/1. Another way, which is also my personal favorite, it stax. Torpor Orb is one of my favorite cards, and it absolutly crushes animar. All of the combos turn off AND it hits most of the removal. Cursed Totem is a close second, and will hurt almost as much as the Orb, as well as shutting off the rest of the removal. With both of these out, they might as well scoop. (Seriously)

My deck is Jhoira, the Beyblade Recycler for anyone curious

H-E-N-R-Y I appreciate the comment, although I don't know what you mean by missing protection. As well, the deck does have a defined direction - stax'ing out the opponent and preventing them from playing Magic while still working on assembling our own win-con.

I do admit, I don't run a large amount of direct permanent-based protection. All I really run is:

However, I do run more spell based protection, namely being:

However, I also do run pieces that counter ETB abilities, which is what has been primarily used against me, (things like Acidic Slime and Reclamation Sage).

I know in your version of Sythis you run a lot more aura spells. I'll be honest, I just don't like aura spells. I don't particularly have a good reason beyond that.

enpc on Can I retarget / neutralize â¦

For the first question, Leveler doesn't actually target, so you cannot retarget the ability. If it was worded as "When Leveler enters the battlefield, target player exiles their library" then you could, but as it currently stands it's not a targeted ability (and for good reason). You can however Stifle it and use Mystic Reflection in response to your opponent casting a creature spell.

As for the second question, yes. Because Phyrexian Dreadnought's ability is a triggered one, Stifle allows you to counter it. Similarly, cards like Torpor Orb would prevent it from activating at all. In their case however, the ability just doesn't happen rather than go on the stack and then getting countered.