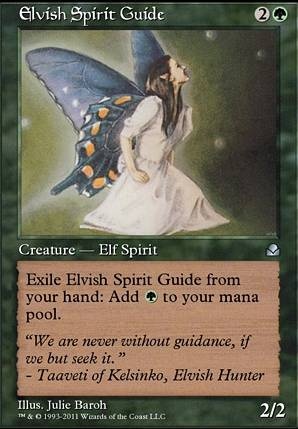 Remove Elvish Spirit Guide in your hand from the game: Add (Green) to your mana pool. 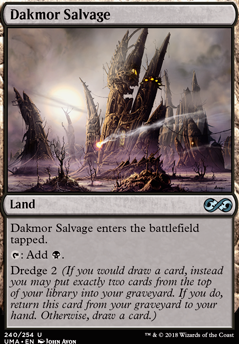 The Origin of Ruination (Animar, Soul of Elements)
by Hc_Clan

Metroid_Hybrid on What to Do with Yavimaya, â¦

On a more serious note, Yavimaya, Cradle of Growth can largely take the place of Urborg, Tomb of Yawgmoth in my Legacy Eldrazi deck..

On one hand, it renders Dismember even worse, but it also pairs nicely with Elvish Spirit Guide in opening new Mainboard possibilities..

All of which intrigues me because I was actually considering dusting off & updating my old Eldrazi deck :)

precociousapprentice: gonna copy and paste my write up for Tireless Provisioner as it should answer how Marwyn got Shaman's spot, and it also expands just HOW important Elvish Spirit Guide is.

Different topic, but Lotus Cobra's most remarkable trait is its ability to get you OUT of a Mana-Neutral Line (Ex. Glade/Beast+ Ashaya+ Quirion).

So typically, mana neutral lines let you draw with the purpose of one thing, finding Lotus and ESG. This line typically leaves you with NO mana in reserves. Now, lets see it in practice:

Draw until you hit Lotus and ESG. With Quirion in hand you have 1 floating, ESG gets you 2, Cast Lotus, Landfall; 1 Floating, and then finally cast Quirion. This becomes Infinite Mana and Draw, so you keep drawing and getting one mana and card at a time until you hit something you can bounce Glade/Beast with.

Draw until you hit Lotus and ESG. With Scryb in hand you have 2 floating, ESG gets you 3, Cast Lotus, Landfall; 2 Floating, and then finally cast Scryb. This becomes Infinite Mana and Draw, so you keep drawing and getting one mana and card at a time until you hit something you can bounce Glade/Beast with.

For teaching purposes: The Mana Dork here can be replaced with Lotus Cobra itself. As Scryb Untap+Landfall is also mana neutral

Now. Try to do this with Tireless Provisioner instead of Lotus Cobra . They all need ONE more mana no matter what outside the line. So basically, to initiate any of the above lines, you need an EXTRA 1 MANA set aside on top of the necessary ESG.

To make matters worse, lets go back to the "Rule of 3". Provisioner has 3 cards that hurt it (Ouphe, Rod, and Maze), one of which is a Tutorable creature. It only has 1 line in the whole deck, and while Fetches were left to fortify Lotus (get us dryad as well), at 3 mana we stop seeing lands unless we got a bouncer.

All in all, Marwyn seems to be the best card for this slot taking Shaman place.

Hmm, but lattice turns all cards in your hand colorless, so Force of Vigor won't be cast for free, so Elvish Spirit Guide + Nature's Claim on either remaining lock piece, so you can at least start playing lands again.

In my experience though, the best answer to a lock like this is a Natural Order into Worldspine Wurm before it can come down.

On the topic of Petal, Simian Spirit Guide and Elvish Spirit Guide do something similar -- they won't be shuffled back in, but they should put in a lot of work.