Walking the Planes
by RicketyEng 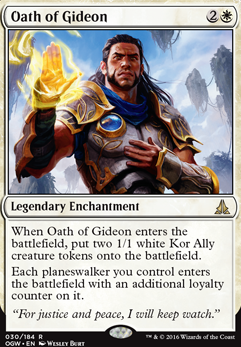 Land decks are interesting and fun. In recent years we have also got a few new commanders to play with for lands and they are all exciting! Each can be built into its own deck, but what happens if we combine the best of each? My previous lands deck, Angry Elementals!, featured Omnath, Locus of Rage as commander and he was accompanied by Mina and Denn, Wildborn and Titania, Protector of Argoth. That deck focused on elemental tribal and landfall. Now let's throw The Gitrog Monster and Ob Nixilis, the Fallen into the mix and have some fun with lands in Jund!

This is a deck of many commanders and it seeks to take advantage of whichever ones happen to be available at any given time.

I chose Xira Arien as the commander because at the time of original construction there were no Jund commanders that really cared about lands. Xira at least provides a turn 3 play, a flying blocker, and sometimes draws an extra card or two. I even once used her card draw politically to draw someone else a card as part of a deal. Then came the summer of 2018 and the release of Core2019 and C18. Xira's leadership of the deck came under review and I investigated a couple of potential candidates for her replacement: Vaevictis Asmadi, the Dire and Lord Windgrace

won the race to the helm of the deck. His first two abilities provide wonderful opportunities for card advantage and land drops. With those two abilities alone he works well as an engine which can be played whenever the deck has otherwise run out of steam. His ultimate is just a bonus piece of removal if the unlikely occasion ever arises to activate it.

Singleton art! In my physical deck I have gone through and made sure that every basic land has unique art. I have carefully selected favourites from among most of the art I have available.

Basic Lands of the Jundlands Show

The amount I have been able to play has decreased this year so I have less time for testing and iterating, but this year has supplied a few goodies worth trying out. The started the year with 48 lands which is plenty, so two of the changes pulled out basic lands. It has been a while since I ran out of lands to fetch, but I do want to be sure to have enough so that doesn't become an issue.

I got a Stomping Ground at the RNA prerelease so it found its way into the deck as a second fetch-able non-basic. It replaced Temple of Abandon.

I finally acquired Crucible of Worlds. It replaced a forest.

War of the Spark had Evolution Sage which has Landfall - Proliferate. It is a card probably worth trying out, but the number of things for me to proliferate are limited in this deck. Sure it turns Windgrace's -3 into a -1, but other than that there are only seven other cards with counters I would want to proliferate. I had it in for one game so far in place of a swamp, but I didn't draw it.

The update I am actually most excited about is Beanstalk Giant. The adventure is an on-par land grab spell as far as cost goes and the land doesn't come in tapped! The fact that I then have commander-style access to a large creature later in the game is just a bonus. It comes in replacing the Evolution Sage for now. I would like to try out the sage again, but I need to figure out what to replace for it first.