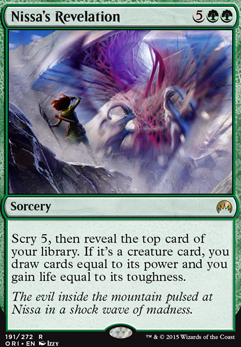 Scry 5, then reveal the top card of your library. If it's a creature card, you draw cards equal to its power and you gain life equal to its toughness.

Polly Wants a Cracker
by Fithakk

No Awakening of Vitu-Ghazi whre Nissa saves the day? What about Elemental Bond ? Nissa is on that ya scumlord and it's got some synergy.

How about Nissa's Revelation where she RUINS the day for everyone while also doing green card draw?

Not even commander all-star Terrain Elemental ? Is this a Nissa tribal deck or a Nissa FAILvor deck???

Viscera Seer : if perhaps you include a recursion/token package.

Shadows of the Past : mana sink, scry each death.

Bontu the Glorified : again, requires things to sac, and a mana sink.

Lifecrafter's Bestiary : still works for casting as it doesn't say 'from hand'.

Reaper of the Wilds : returns attacks via deathtouch, and on death scry triggers.

Nissa's Revelation : could be fun depending on how many critters you have in it.

Explorer's Scope : ramp, and land off the top. Combined with other things you can plan around it.

Mirri's Guile : rearranges top 3. Might be outside your budget though.

Cream of the Crop : could be interesting, creature dependant.

Grim Flayer : not sure if good, you'll have to decide.

Scroll Rack : another pricey card but it sets things up.

Vizier of the Menagerie : Pretty handy if you've got a fair bit of critters.

Galvanoth : While not top manipulation, it can be pretty spicy with other top deck stuff.

Riddle of Lightning : depending on how high your curve goes it could work.

Gadianten Thanks for the feedback! I'm going for more of a budget-ish build here (I already own anything in the list that's over ~$5). I hadn't thought about adding Multani, Yavimaya's Avatar though, and I appreciate the land ratio feedback! I think I'll cut Nissa's Revelation, Seasons Past, and Rishkar's Expertise in favor of another two basic lands, but I'd appreciate feedback on any other cards that I should cut instead.

Welcome to the Jungle (Omnath fun and games)

You have two Nissa's Revelation

You are probably right. However, I calculated, that every 4,76th card is a dinosaur, so that each hit of Gishath (given he is unblocked) should mathematically drop a dino, often even two. This is why, I also try to improve my library management - but Naya colors don't give many options to scry. The hidaway lands come at least close to being scry and on the long run I am trying to get my hands onto the real scry lands. Nissa's Revelation could be another option. I fear, that if I put in more dinos, I will eventually need to cut on the ramp creatures. After, I might end up being very slow or I need to turn the strategy of the deck around to focus on playing dinos for free with cards such as Descendants' Path or Quicksilver Amulet - but that would end up being a very different deck (but of course, it might be a nice brew).

Thank you for your comment however. Do you have any recommandations, what to cut?