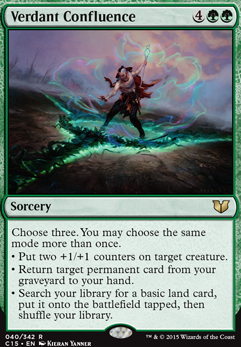 Verdant Confluence occurrence in decks from the last year

Sliver: the Gathering
by Cadois

Creators and Destroyers
by DanteBeleren

Alright I'ma break this up into a couple parts. First let me say that I like the concept of the deck! It's pretty cool, and Mowu is a bad ass! Next a lot of these suggestions are going to be meta dependent so keep that in mind. Lastly I think you're too focused on equipment in a color that doesn't do equipment very well... I think you should play some more enchantments as Green does enchantments well! I also think that you should lean into the fact that Green is the best color for ramp, and that makes cards like Strata Scythe / Blanchwood Armor / Blackblade Reforged stupid good.

Here are some cards I think you DESPERATELY need to put into the deck as they are staples or provide a LOT of value.