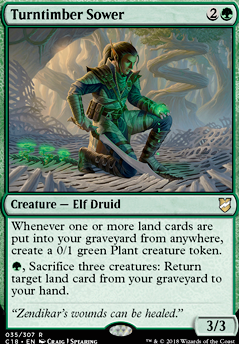 Whenever one or more land cards are put into your graveyard from anywhere, create a 0/1 green Plant creature token.

, Sacrifice three creatures: Return target land card from your graveyard to your hand. 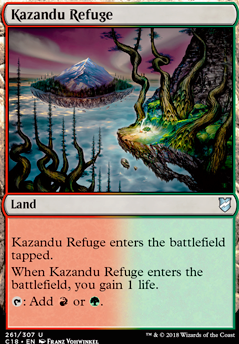 Ever Consider Hardened Scales ? I know it works with only a few cards but it could turn Korvold into a threat much faster.

I've played a few Jund land decks and they all have roughly the same problem: low creature counts. I would suggest something that creates tokens like Turntimber Sower , Dragonmaster Outcast , or the aforementioned Crawling Sensation . Hammer of Purphoros works triple duty by eating lands, making bodies, and giving everything haste.

I really like this! Very close to what I would make in a world where I have several thousand dollars to spend on cards. Are Turntimber Sower , Avenger of Zendikar and Squirrel Wrangler just craterhoof food? I've been unimpressed with them in the past. Also, with the advent of Elvish Reclaimer , Lotus Field and Springbloom Druid I've been leaning more and more toward playing Amulet of Vigor . Is that too cute?

I am no longer convinced that Omnath, Locus of Rage is the best fit for the deck his only real synergy in this case is when after paying his full cost (7 mana), resolving a Scapeshift , Splendid Reclamation before using a board wipe like Damnation or Blasphemous Act wherein all this time, Omnath, Locus of Rage himself is not removed. There seem to be just too many points of failure to too little reward in this case.

I believe that Avenger of Zendikar is in a slightly different boat as the plant tokens are put down as part of the resolution, and he is not reliant red mana as well as green mana to cast. The main mana accelerant in the deck is Cabal Coffers + Urborg, Tomb of Yawgmoth to try and resole a large Exsanguinate or Torment of Hailfire so colour fixing large cost spells is important. Most creatures are also based around synergies such as:

This excludes utility creatures such as Eternal Witness or Acidic Slime which are supposed to be broad stroke ways of dealing with multple situations/threats.

I think that potentially Omnath, Locus of Rage and Turntimber Sower may be the cuts to fit in Mirage Mirror and Elvish Reclaimer as more utility rather than trying divert resources into what feels like a 3-card synergy for which the deck has limited (or precious) tutors.

When the deck was originally put together (from the precon) I was throwing around a whole bunch of cards and one that caught my eye was a foil copy of Reap and Sow I had lying around. Compared to Realms Uncharted and Hour of Promise it may appear underwhelming but it does have two important distinctions: the land enters untapped, and it can be a targeted land destruction spell if needed. Now specifically this could be used to destroy two lands if needed by entwining the costs and also retrieving a Wasteland or Strip Mine but I think that an unrestricted land search effect wouldn't be unwelcome. There is limited room for cuts until a bit more testing but I think that it could be a good supplemental effect. The only concern would be having an oversaturation of land search effects without payoffs.

Pride of the Kraul

I have considered Titania several times in the past and I believe that she would do very well in the deck. The sole reason I haven't ever put her in is that I am not completely sure if she's core enough to my strategy to justify her price.

That being said, I have recently added Turntimber Sower to the list and he may convince me to invest into Titania , should he do well enough in the deck.