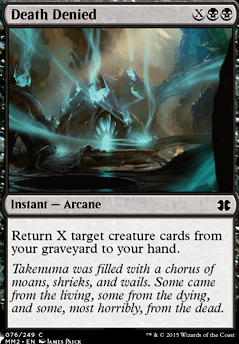 Death Denied occurrence in decks from the last year 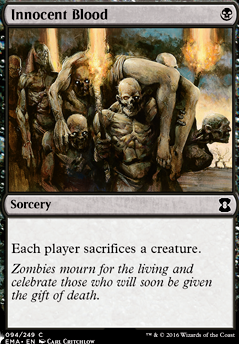 I would have to agree - omen > undying evil if you cannot self sacrifice the creature.
That fog of gnats is really bad, it should probably be better off as more copies of cuombajj. I would go -2 pestillence + 2 Chainers, especially if you have no aggro decks in your meta.

The SB can use some work as well. Choking sands is either 4 copies or none, I would go for none. -2 sands + 1 Death Denied + 1 Liliana's Specter (greaat devotion + discard) all in one.

The maindeck is close to perfection, I would trim 2 victim of night (or 1 disfigure and 1 victim) for 2 Dusk Legion Zealot, but other than that it is fine.

The sideboard has some weird choices though. Reaping the graves is very old and the newer Death Denied surpasses it in every way. Choking sands is a card that you run 4 copies of or none of - your Tron matchup should already be good, so cut them for 1 Spinning Darkness, 1-2 victim of night that were cut from the main and 0-1 extra copies of tendrils, depending on how many victims you want to add.

The lands you add should be sac lands like Terramorphic Expanse. Fitting in 1 Death Denied can really help the end game.

The idea is to get away from 1-time sacrifice effects and get into the permanent sac outlets business.

Aristocrats of the Black Forest

I have worked on trying to perfect a list here - bg sac value pauper. I think that Brindle Shoat and loam dryad are the key cards. I think your list can use a couple of lands and a better Raise Dead effect and more card draw.