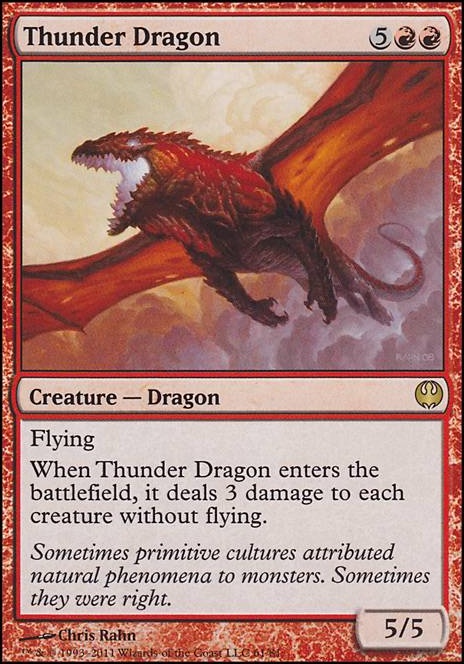 When Thunder Dragon enters the battlefield, it deals 3 damage to each creature without flying.

Razia, Queen of redirection
by Player4our 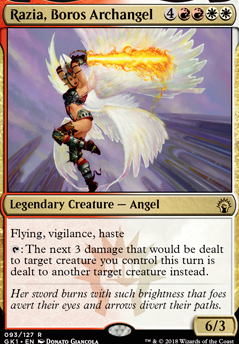 i can be your angle...or yuor demon...or ur dragon
by becks16

Hello, to make this deck faster I'd cut like 2-3 lands Blackcleave Cliffs and one of Mountain and Swamp for Birds of Paradise , Deathrite Shaman and Nature's Lore .

For Dragons, which I guess you want win with I'd use ones with lower CMC since they're easier to cast and provide cool effects:

Malfegor for Kolaghan, the Storm's Fury - I just don't like discarding hand especially in a deck without mass reanimation ( Patriarch's Bidding ), while Kolaghan can pump all the Dragons, which with Atarka's Double Strike becomes lethal

For planeswalkers I'd strongly suggest trying out Sarkhan, Fireblood

About lands - I think that actually Shinka, the Bloodsoaked Keep isn't that great. If you want more sources then I'd actually suggest better fixing, namely City of Brass , Mana Confluence , Llanowar Wastes , Karplusan Forest and Fellwar Stone might be a good idea.

Infinite combos are actually very good when you all are in a tight spot when nobody can win the game and it already feels like going for too long. Also I personally try to use them to win with stronger decks, while with less cutthroat playgroup I prefer to win with normal combat damage or damage triggers from Scourge of Valkas and/or Dragon Tempest so overall it's good to have that option but it's execution and usage is only up to you.

With Nesting Dragon keep in mind that even budget Evolving Wilds might be very good as it fixes mana and creates 2 tokens.

One more thing - I'd cut some less optimal Dragons for more ramp options like Demanding Dragon for Skyshroud Claim or Thunder Dragon for Goreclaw, Terror of Qal Sisma (might not look like a ramp but not only makes dragons cost less but you have additional source of Trample for them).

cdkime I would REALLY like to put Price of Glory but I can't decide what to cut. I was thinking possibly for Disciple of Bolas but I know it would go well with Utvara Hellkite. I have decided to cut Tariel, Reckoner of Souls for Iona, Shield of Emeria and then Mordant Dragon for Utvara Hellkite next is Thunder Dragon for Balefire Dragon next is Wrath of God for Akroma's Vengeance next is Sire Of Insanity for Dragon Mage. do those seem reasonable?