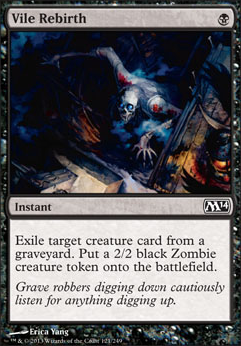 Exile target creature card from a graveyard. Put a 2/2 black Zombie creature token onto the battlefield.

When Hel freezes over (increased budget)
by Phion

I would recommend Shamble Back, it is way better than Vile Rebirth it gains life and is also essentially the same card just better. Also with all of these planeswalkers I would recommend either or both Demonic Tutor to get out one of your combos, The Chain Veil is also great.

Everytime I look at ghoulcaller gissa, Im impressed by her ability to generate so many tokens so easily, even from her own 2/2 tokens.. I'm thinking about putting her in my Syr Konrad's For the Void deck, just to make even more tokens, but its quite hard to find any free spot at this moment :D

Anyway, I know this is a budged deck, more or less, but why Ur-Golem's Eye? I would rather go with Sol Ring/Bontu's Monument or any other mana-cheaper manarock.
Armillary Sphere - in Gisa deck, Burnished Hart seems like a better option to me. You can either sac hart to Gisa to make two tokens or sac it to itself to fetch two basic lands if needed.

Hymn to Tourach - This honestly doesnt feel like it belongs too much in here, since its no discard focused deck. I would replace it with Village Rites, since you have plenty of creatures and tokens to sacrifice + Village Rites is instant for only one , strictly better Altar's Reap. Or Vile Rebirth to get rid off some annoying card if you play against some graveyard decks + makes you a 2/2 zombie token at instant speed for only one .

I think you might also cut like 2 lands, since you have plenty of cheap creatures, with few mana rocks and rituals anyway. Adding Feed the Swarm might also be pretty good, just as another creature removal or finally a good enchantment removal in black. Life loss is minor, since most enchantments are not mana-expensive anyway. It also gets better, if you would have Vilis, Broker of Blood on board.

Thornbite Staff - Next to Gisa, this is another card that gets more and more interesting the more I look at it :D If you equip it to Gisa, then sac some creature to Gisa's ability, you can untap Gisa and sac another creature again.
Phyrexian Altar - more expensive card to get, but it goes to so many combos. Especially to the previous one with Thornbite Staff, which can make infinite etb/die triggers just with only one 2/2 creature and Gisa equipped with staff with Phyrexian Altar on board. Then add some aristocrat effect like Bastion of Remembrance and the game is over.
Grave Titan - costs few dollars, since it got reprinted in Mystery Booster Boxes and is also great friend to any reanimator, zombie tribal or simply Gisa deck for the absurd amount of tokens it can generate. Also goes infinite with Nim Deathmantle and Ashnod's Altar.

I totally forgot that Vile Rebirth is an instant! Thanks for the tip! The deck isnât technically a budget deck. I usually just work with what Iâve got and then buy less expensive cards that synergize with the deck. Thatâs why Kalitas is in it. Heâs a good Aristocrat and Iâve had him since Oath of the Gatewatch came out. I tend to use him quite often.