At the beginning of your upkeep, choose target opponent. This turn, that player can't cast spells or activate abilities and plays with their hand revealed. You may play cards from that player's hand this turn. 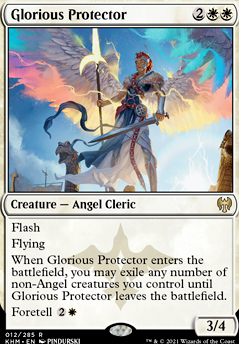 The Kingdom of Hallownest
by MXG03

A little off theme but Sen Triplets counts as an artifact for getting a 1/1 faerie and you can steal threats from opponents hands and they can't cast on your turn.

Eye of Singularity is hilarious with Faerie Artisans

Cave of the Frost Dragon & Icingdeath: I get that this is connected to Drizzt and that they literally wanted to make a "White Dragon" a white Dragon, but it's awkward that a white card, of all color identities, is used to represent a Chaotic Evil entity. (I lack hardcore D&D history knowledge, but surely there must be a suitably iconic Black or Red Dragon around, right?)

Treasure Chest: I'm not a fan of this much randomness (enjoy spending 3+4 mana for nothing!), but I guess if you build your deck such that you're okay with either the Treasures or the card draw it's reliable enough.

Circle of Dreams Druid: IMO appropriately costed Cradle on legs, although TBH I wish it wasn't an Elf.

Flameskull: Neat design space, could easily see this getting a semi-functional reprint as a Phoenix

Xanathar: as a commander, Sen Triplets is cheaper and gives access to another color, but at least you don't have to much around with Chromatic Lantern

Hive of the Eye Tyrant: nothing too exciting (it Disintegrates dead bodies I guess?) but I like the negative space in the art

Tarrasque: Kinda wish this was in the Commander product so it could really be pushed, but w/e. Also, plain "Beast" feels like more appropriate typing.

You See a Guard Approach: The art makes the Guard in question seem incredibly nearsighted.

Lol. I just realized I need this in my Sen Triplets deck.

I love your deck! I have kinda a similar one, but with Sen Triplets at the helm. Maybe you want to consider it? I'll link my list: How to lose your friends

Some of the most popular theft commanders are Sen Triplets , Merieke Ri Berit , Rubinia Soulsinger , Empress Galina , Yasova Dragonclaw , Brion Stoutarm , and Marchesa, the Black Rose . I would say that Marchesa is the strongest one, but if you want to do them all, a good option is Sisay, Weatherlight Captain . She can tutor them all out.

seshiro_of_the_orochi on Other Good Foretell Commanders

If you're planning to include Cosmos Charger , Sen Triplets could be an option.