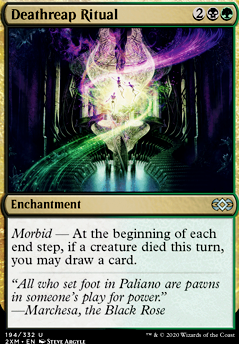 Morbid â At the beginning of each end step, if a creature died this turn (was put into the graveyard from the battlefield), you may draw a card.

"Justice Urged On My High Artificer."
by Kootaroo

Dont forget cards like Fecundity and Moldervine Reclamation that draw you cards when creatures die. Deathreap Ritual would also be decent.

Hey, I'm trying to fit Crop Rotation and Utopia Sprawl in my deck any advice on which cards to switch please? I was thinking take out Second Harvest as I don't know how much tokens I can produce and also taking out Deathreap Ritual as I'm kind of unsure how much cards I could drop, or also taking out Read the Bones but maybe I'm wrong and I need those cards in my decklist?

I also had some other cards I mentionned in my previous message, not sure you had the time to read it.