Jarad, Golgari Lich Lord gets +1/+1 for each creature card in your graveyard.

, Sacrifice another creature: Each opponent loses life equal to the sacrificed creature's power.

Sacrifice a Swamp and a Forest: Return Jarad from your graveyard to your hand. King of Fling
by KingLonsur 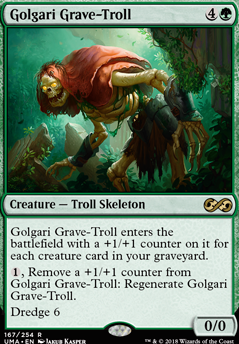 The Mimeoplasm, and The Mamyoplasm are in a saloon
by Ambiorix69

I can only recommend Jarad, Golgari Lich Lord off the top of my head, to yeet your large bodies to lethal the whole board as an alt win con. Will thank on it and visit again.

I wanted to know how Jarad, Golgari Lich Lord and his 2nd ability worked with Multicolor protection creatures you control like Stonecoil Serpent.

Will I be able to sack the stonecoil serpent creature with Jarad and make opponents lose life since it says "sacrifice another creature" and not the word "target" at all during the 2nd ability. I think this would work and get around the protection, but I wanted to make sure this works since Jarad is a green/black multicolored creature.

The Deans of Witherbloom

Varolz, the Scar-Striped could be interesting in here. Or Jarad, Golgari Lich Lord

Pikobyte which for 4 mana (1 for Kaya's Ghostform and 3 for Jarad, Golgari Lich Lord ) to deal 18 damage that I can repeat as long as I have the mana to do so is a lot.

Pikobyte for instance I have Jarad, Golgari Lich Lord which may cost 2 more than a Blasting Station but it deals x6 the damage to everyone not just 1 player.

Jarad, Golgari Lich Lord one of my fav golgari sac creatures, might make a good finisher since all your cards are such low cmc Abrupt Decay super clutch G/B control card. Lotleth Troll and Relentless Dead make for great sacrifice cratures Viscera Seer and Carrion Feeder can be pretty clutch Rancor is nice as well to keep those lowbies swingin.