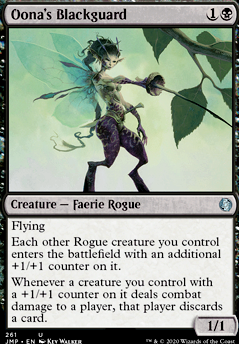 Each other Rogue creature you control enters the battlefield with an additional +1/+1 counter on it.

Whenever a creature you control with a +1/+1 counter on it deals combat damage to a player, that player discards a card.

Oona's Blackguard occurrence in decks from the last year

Your Deck is Mine
by illidan123

Try Jokulhaups in Torment of Hailfire's slot. It's terribly mean but you'll end the game within a few turns assuming your opponents don't scoop.

Discard is incredibly effective here also. Vindictive Lich, Oona's Blackguard, and Sadistic Hypnotist are the best of the bunch here.

Feel free to check out my list (assuming you haven't already, there's a lot of similarities). Upvotes on any of my decks are appreciated. Every Masochist Needs a Marchesa To Love Them

I am looking at giving them a try in modern with some mill theme shenanigans while poking and prodding with small, evasive creatures. Most of what I am considering right now are faeries (Oona's Blackguard and Faerie Impostor, for example) and getting multiple Thieves' Guild Enforcers online, especially with Phantasmal Image seems to me to be able to play a solid game, at least against decks without many creatures.

I personally play Grixis discard with Marchesa, the Black Rose at the helm. Mines more of an etb/death trigger abuse deck though. Hand Hate Marchesa if you feel like taking a gander.