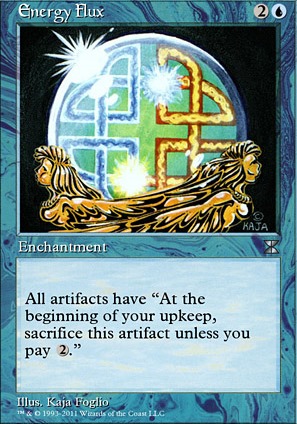 All artifacts have "At the beginning of your upkeep, sacrifice this artifact unless you pay ."

Energy Flux occurrence in decks from the last year 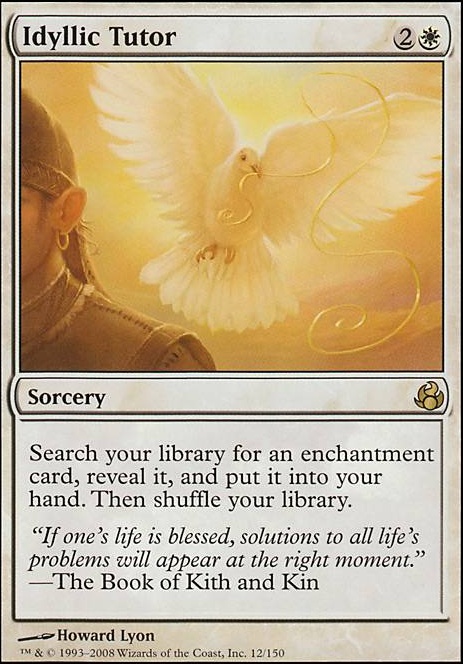 I think that's all I got. Good luck!

You might find running off-color fetches like Flooded Strand or Verdant Catacombs to be helpful. These will act as secondary Tropical Island s and Breeding Pool s, and make your mana way more consistent. Waterlogged Grove is another ETB-untapped dual you may want to consider. Birds of Paradise is an excellent dork you should run. Depending on your meta, Carpet of Flowers may be worth including. In conjunction with your Arbor Elf , Utopia Sprawl and Wild Growth can be better than one-mana mana-dorks. Fyndhorn Elves is another Llanowar Elves .

Running Primal Surge puts a bit of a damper on the traditional blue side of EDH; not being able to run Ponder , Preordain or Brainstorm is difficult. However, if you run permanent-based card-draw, you can probably get around this problem -- Hydroid Krasis is a good start. Jace's Archivist comes straight to mind. Since you're running so many creatures, Edric, Spymaster of Trest could be an Ancestral Recall most turns. Slate of Ancestry in creature decks is... good.

Keeping your opponents from doing things is similar to drawing cards. Narset, Parter of Veils is excellent to keep combo-players back, and also nets a card; running Root Maze and Arcane Laboratory are similarly powerful. If you run Wirewood Symbiote and Elvish Visionary , you can produce mana and card-advantage. With your Intruder Alarm , you can go off with enough mana dorks; similarly, using Words of Wind to return the Elvish Visionary can get you infinite experience, enemy-permanent bounce, and mana. Energy Flux is really good, in the right meta. Depending on your opponents, Heartwood Storyteller can be a good draw engine. Mystic Remora is a good turn-one play if you have a slower hand.

Similar to your Inkmoth Nexus , Blighted Agent can produce an insta-win.

Reclamation Sage is a good utility-creature, since you can't run Krosan Grip or Nature's Lore . Mystic Snake is a creature you can use as interaction, like Venser, Shaper Savant , Draining Whelk and Frilled Mystic . With Deadeye Navigator , you can recur this effect. Eternal Witness 's Regrowth effect is a good use of a slot, as it can recur countered threats. Walking Ballista synergizes with your general REAL good; Hangarback Walker is similar, but I think it's a little worse.

Concordant Crossroads is useful if you wanna activate Prime Speaker Zegana right away; it also enables chaining dorks together, each casting the next, while something like your Beast Whisperer acts as a draw-engine.

Right. That's all I can think of right now. Good luck!

Right off the bat, you should strongly consider Smothering Tithe to run alongside your Stasis . Each turn cycle, all three of your opponents have to pay to cut you off one blue, meaning Stasis is very likely to stay put.

Second, instead of running Bident of Thassa , you should consider running a Green Sun's Zenith to fetch your Edric, Spymaster of Trest . This gives you the redundancy that two of the 'hit OP draw' effect while allowing you to fetch other things with GSZ, including a Dryad Arbor turn 1, if you choose to run that, or Reclamation Sage to take out a pesky artifact/enchantment.

Similarly, I always feel weird running signets or Commander's Sphere in a green deck. If you have access to green, you have access to dorks (which are way better than signets). Avacyn's Pilgrim , Fyndhorn Elves , Birds of Paradise and Noble Hierarch are all REALLY powerful. Priest of Titania and Bloom Tender are both two-drops that make enough mana to be busted as well. Similarly, I don't think Solemn Simulacrum is ideal in this deck. If you cut the artifact ramp for dork ramp, you can run Kataki, War's Wage or Energy Flux to great effect. Also, Stony Silence becomes just... real good.

Suppression Field is also an excellent card. You aren't running fetches, which is fine, but decks that DO run fetches despise Suppression Field -- AND it hoses 'walkers, which you run 0 of.

Playing lock pieces, you're going to draw a lot of counter magic. I advise Dispel as an efficient piece of counter-counter magic, as well as Flusterstorm if possible. In the vein of counter magic, I don't think Hinder is very good. If you're afraid of an opponent just getting value out of the spell in the graveyard, Void Shatter ensures that your opponent doesn't just tutor it back later.

I think Supreme Verdict is better than Wrath of God , if only because it dodges counter magic. You probably don't want to run two wrath effects (because you're a go-wide creature deck), so I advise just replacing wrath with the verdict.

Tutor-wise, Mystical Tutor and Enlightened Tutor would be great for this deck. Mystical can get any instant or sorcery you need, be it wrath or ramp, while enlightened can find you lock pieces fast. I highly suggest them both.

Brainstorm , Ponder and Preordain are all excellent cards that make a borderline hand into a good hand. I think all blue decks should run these Xerox pieces, as they find lands and/or important spells at a very low cost.

Depending on how prevalent blue is in your meta, consider Carpet of Flowers . It is a REALLY good card.

I advise running Utopia Sprawl and Wild Growth . With Derevi triggers targeting the enchanted land, these produce extra mana. Also, if you run Arbor Elf , they make it tap for extra mana as well. Notably, the sprawl can only target a forest. This isn't really a problem, as I think you should try to make your land base lean green anyways. Early in a game, you want to ramp first, which requires green and then enables you to find your other colors.

Grasp of Fate is probably better than Return to Dust . It has a wider range of targets, and tends to hit more permanents for less mana.

I think people tend to underestimate the power of soft-counters in EDH games. In the late game, when players have ramped their entire decks out, they do tend to be somewhat useless. However, early interaction is invaluable. I recommend at least trying Spell Pierce in a few games, as this can counter an early Sol Ring and make all the difference.

Speaking of odd EDH counterspells, Mental Misstep is another tremendously undervalued card. If your meta is fast, it can be a complete game changer; if your meta is slow, it is indeed useless. That's a meta call, but I put it out there because I've had great success with it.

Mystic Remora is a good way to draw cards if it comes down turn 2 or 3. You should consider running it.

I would suggest running Sower of Temptation over Keiga, the Tide Star . It is vulnerable to removal, but gaining control of a creature and impacting the board right away is worth it, at least in my opinion. Similarly, if you want to lay down some real cash, Gilded Drake is a good option.

You should at least consider running Thalia, Guardian of Thraben . With dorks and the untap abilities from your general, you're likely to have more mana than your opponents, making her ability more and more one-sided.

I think Reflecting Pool is probably better than Meteor Crater . You might also consider running City of Brass and Mana Confluence , as I've had good success with these in 3-color decks. Exotic Orchard and Forbidden Orchard are also considerations for mana fixing.

Mother of Runes is a D&T staple you might want to consider. She's very good for protecting your creatures, although she is a nonbo with the aforementioned Suppression Field .

I feel that Mulldrifter is included because it can be flickered with Roon of the Hidden Realm and Brago, King Eternal . Seeing as the blink effects aren't in the command zone, I think just running Fact or Fiction and/or Dig Through Time would be better, as they are instants and let you leave up counter magic. Treasure Cruise is good too, although this is a sorcery. Chart a Course , Slate of Ancestry and Shamanic Revelation are also good cards for this deck.

You may wish to consider Howling Mine . It will always draw you a card on your draw step, as the untap step comes first. However, if you tap it down with your general's ability, the effect becomes asymmetric.

A long overdue update of the deck that I still play with pleasure.

I haven't bought a Mindcrank yet, but now that I removed Energy Flux I will try to make room for it.