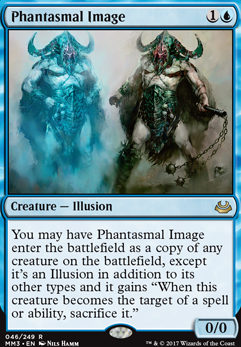 You may have Pantasmal Image enter the battlefield as a copy of any creature on the battlefield, except it's an Illusion in addition to its other types and it gains "When this creature becomes the target of a spell or ability, sacrifice it."

Phantasmal Image occurrence in decks from the last year

SUPER AWESOME +1 from me!

I have Muldrotha built as well and I love it

What is the combo with Muldrotha, the Gravetide, Lion's Eye Diamond, and Phantasmal Image? I'm not seeing it

greyninja on Iâm new to cEDH and ...

Assuming Animar, Soul of Elements has four +1/+1 counters on him; Ancestral Statue is your first pick to make animar infinitely big

What to do with the other 2cmc? Could always go with Essence Warden for infinite life.

Phantasmal Image or Fblthp, the Lost for the lolz

If you have something like Earthcraft already on the field; instead go get Purphoros, God of the Forge and Shrieking Drake for infinite damage

Good luck! Animar is my favorite!

Great deck! Has long been my favorite of the lab maniacs decks and I have been developing my own version parallel to yours for a long time except I still run Freed from the Real combos and it is more budget friendly. My question is why I haven't seen you test Reap before which I have found to be very impactful at any point in the game. Also, what kind of combo density is appropriate for the goals of this deck? I also run Phantasmal Image and Palinchron as the tutors such as Neoform run parallel between that combo and freed lines, but I wonder if I have lost focus from the control elements to create more winning conditions. Lastly, Any news on more from you guys? Busy lives I know, but are you going to be playing Tasigur, the Golden Fang more this season?

HezTheGod I ran verycard you mentioned: Exploration felt rly odd on a deck with 29 lands. Most of the time I wouldn't do much with it, and mid/late game if you're drawing a lot of cards, drawing into that does allow you to drop some extra lands, but then again, it's not what you want to do, you just want to keep chaining turns, and if you fizzle you want to be able to last a turn cycle, so I cut it long ago.

Wingcrafter I ran it, then I cut it out, then I ran it again xD with the new cards recently being printed, a couple of new faeries, and as you can see, my list tends to have other hate cards like Slime and Scooze, I rather take out a creature that's only good when you have another on the board, and that it doesn't have the good creature types.

Green's Sun Zenith I ran it all the way up to Finale of Devastation's release. My playgroup tends to have quite some MLD and pyro effects, and while T1 GSZ into dryad is good, getting Pyroclasmed turn 2 and losing that land was painfull. And when the Finale was released I swapped it, for the ability to be able to grab stuff like Tetsuo, and also being able to grab stuff from GY

Phantasmal Image I ran it as well all the way until this last update, with more Fish/hulk hate. Basically was good vs some good creatures and the way to "interact" with Elesh Norn, but then the meta is more Fish/hulk and I rather have extra GY hate with Slime, and ways to stifle Fish with Obstructionist

Druids' Repository Is actually the card I tested the least, as the first times I played it, a couple of years ago, I guess there was more disenchant effects in my meta, and it wouldn't last much. So I took it out. But I looked back at it again, since my meta changed. It's indeed a good card, but then again, I'm on a slower list trying to rely on mid/late game ways to win, and early game I rly want some mana up (from lands) xD

some notable cards i run i see you do not:

Caerwyn on Yarok and making Copies

Visionary will only trigger when the item entered the battlefield, a trigger which will be doubled.

Even if the card worked as you thought it did, you'd only get the Visionary triggers when the card initially entered the battlefield--becoming a copy of something does not count as a new instance of that object entering the battlefield.