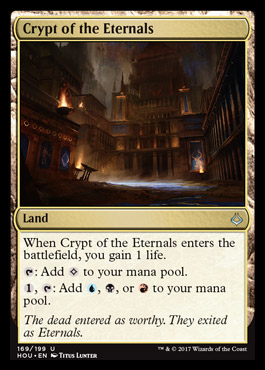 Crypt of the Eternals

When Crypt of the Eternals enters the battlefield, you gain 1 life. 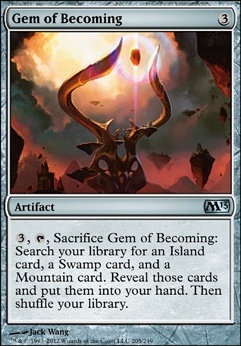 Crypt of the Eternals Discussion

Bolas's Pro-Life Superfriends is my first attempt at:

Initially i thought of going Bolas Tribal (hence the commander) because i got a japanese prerelease promo of Nicol Bolas, Dragon-God while on holiday in Tokyo, which i obviously really wanted to build something with. Piece by piece i adjusted the list to be a little more synergistic instead of a theme-deck until it looked like the list below. Very little Bolas left, but probably something that can sometimes hold its own. Still very casual, but I think fun for a while. I think it should work but i haven't played a game yet.

Any feedback and tales from experience from my fellow T/Oers is much appreciated on any of the deck's pieces.

Some questions i have are:

Crypt of the Eternals might also come handy. At least as a 1 of.

Lastly, if my first suggestion for adding mana rocks is taken, you should be able to reduce your land count to ~39 and add more cards in their place. These are my suggestions for those swaps: Crypt of the Eternals < Toxic Deluge , Urborg, Tomb of Yawgmoth < Swiftwater Cliffs < Clever Impersonator , Highland Lake < Negate

Your deck has some requirements, so you should only run nonbasic lands and mana rocks that can add somehow. Some cheap suggestions are: Reliquary Tower , Unclaimed Territory (I see you have a lot of wizards), Exotic Orchard (usually tap for all your colors), Darkwater Catacombs , Sunken Hollow , Shivan Reef , Underground River , Fetid Pools , Temple of Epiphany , Temple of Deceit instead of Crypt of the Eternals , Rupture Spire , Vivid Crag , Vivid Marsh , Temple of the False God and some basic lands. // Unstable Obelisk is really expensive for what it does - Reality Shift do the job cheaply. Archaeomancer is great for recursion.

Id suggest swapping Crypt of the Eternals for Opulent Palace since that is the colors your running. Ghost Quarter is better then Encroaching Wastes in my opinion. Chromatic Lantern is good for color fixing and its pretty cheap thanks to reprint.