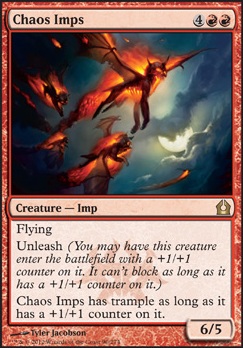 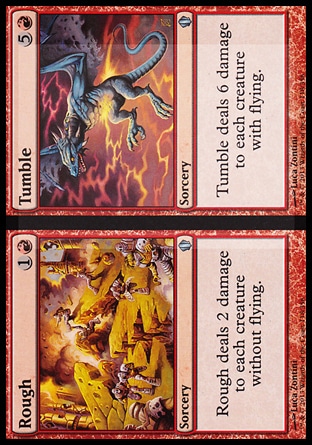 The show must stop?
by Critter512

Smash 'em down
by HenDog

No no artifacts
by glitched_k1n9

Thanks, Urethra_Franklin this really helps.I have been trying to buy more copies of the Vexing Devil, but have had no luck so far.Your recommendations to limit my single cards is something I have been working on with this deck. I think I have already gotten rid of Chaos Imps, Firefiend Elemental, and Bloodfray Giant. I need to pay more attention to mana costs. I tend to really like cards abilities and forget to compare it to another similar card with less mana costs, like Goblin Guide

You're right about the Wild Cantor's, now that I think about it they're a relic from when the deck was still three-colored and the mana-fixing might've been relevant.

I'd prefer creatures with either haste or comes-into-play/on-cast effects for the bigguns, or at least evasion. Chaos Imps and Gravetiller Wurm I had lying around and at least they've got the evasion part down. I kinda hoped that I'd churn out enough creatures and get enough value out of them before they bite it for instant-removal to not be too much of an issue, but I might be gravely mistaken on that front.

Plated Crusher's got a lot goin' for it ((Generator Servant could help with haste), but flavor-wise it just doesn't feel appropriate. The little guys are literally burning themselves alive (along some trees) to summon something, so I'd rather the result looked somewhat supernatural or at least creepy and monstrous, like Gravetiller Wurm and Decimator of the Provinces.

Nonetheless, Deus of Calamity seems legit simply because of how much it could cripple opponents if left unchecked, as you said. Since it's cheap to afford I might even grab 4 copies.

Chaos Imps doesn't do much with your deck. It's just a big dude. Hero's Blade might be a good one to add. It makes Tana much larger. Fecundity might also be one to add, as would Bloodspore Thrinax.