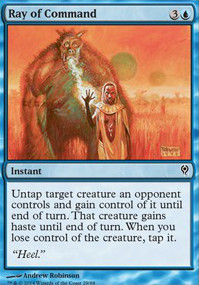 Ray of Command occurrence in decks from the last year

I remembered Ray of Command as the only temporary mind control effect at common and instant speed and how temporary mind control effects shifted to red and sorcery speed over time, e.g Hijack . So I decided to give it a drawback and make it more expensive to balance it for instant speed. The drawback can be turned into an advantage with a bit of buildaround (ETBs) and still fits the effect of the card thematically and is on color, compare it to Teferi's Time Twist for reference. Don't forget, if this spell gets countered, your creature is gone.

To add further explanation. Ray of Command takes control of a creature after it is on the battlefield and its ETB effect has already gone on the stack. In order to do what I assume you wanted to do you need to cast something like Aethersnatch which takes control of a spell (any spell, even their commander) while it is on the stack and when it resolves if it was a permanent, it will enter the battlefield under your control and you will get the ETB.

Here's an example. Opponent casts Craterhoof Behemoth, trigger goes on the stack, I cast Ray of Command. Whose creatures get buffed?

What is your win-co? One Ray of Command and a bunch Staggershock?

Because I've just playtested your deck and the late game is about drawing cards and removal, but no pay-off. And a single Bojuka Bog main? I don't want to sound harsh but your deck desperately needs help IMO. Put some Striped Riverwinder or something. And land-lifegain is fun but 4 Radiant Fountain AND Ash Barrens is quite an unhealthy land-base.

I see on your profile that you have a lot of Pauper decks. I presume you're familiar with the format XD But this deck is quite unfinished. It's cool thought to see a UR deck that doesn't run Delver of Secrets

Flip nor is blitz storm, so you have my upvote. This format needs more midrang-ish deck if you ask me, we need more flavor, keep it going :D

If you want to steal creatures, then I think Memnarch is an auto include, along with threaten effects in . Ray of Command type cards are great, along with Bribery, Gilded Drake, and the like. If you can run some ways to bounce the Drake (like Capsize), folks will get sick of you real soon. Play the Drake, steal a Commander, Man-o'-War the Drake, steal another Commander, and pretty soon, no one likes you!

Just some options to think about. I'm sure there are better ones out there, too.