Whenever a creature you control dies, you draw a card and lose 1 life.

The Dead Don't Die
by Autumnbloom_Sage 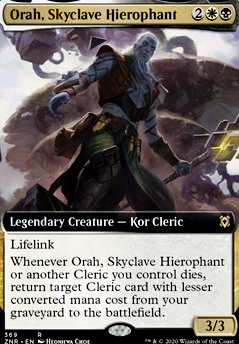 Phostration Thanks for your input. I know about Blood Artist but I don't own any copies and he isn't available at my LGS so I didn't include him in this deck. Vampiric Rites is actually cool card. Will try to fit in. Also the Dark Prophecy combo is nice but I would rather use Midnight Reaper instead since it's a creature and I can sac it.

Cruel Celebrant for the same mana as corpse knight does more especially when your focus seems to be to kill your things. Vito, Thorn of the Dusk Rose will turn any lifegain into damage as well which works well with Ajani's Welcome and Cruel Celebrant. Teysa Karlov is a must have in any deck focusing on triggers caused by creatures dying, although she is a little higher mana cost. Dark Prophecy will help you draw cards and play things faster since you would have a lot of mana from cryptgast.

Hello there! Totally cool list, this should be upvoted more! :3

For most decks that runs black I recommend Tortured Existence. Very cool and oldschool card just for one that can easily get you some big reanimator targets into your graveyard and some smaller creature back into your hand to re-cast it, at instant speed. However, I personally use it as an engine in my Syr Konrad's For the Void deck, together with Desecrated Tomb and Phyrexian Altar. I think it could fit here aswell, since you could get infinite experience counters to reanimate literally any creature that would ever exist (most likely). :D
The bad thing is, that combo doesnt work with Necropotence :( But you can draw as many cards as you want with your Grim Haruspex (Dark Prophecy/Smothering Abomination are an alternative options).
Viscera Seer for just one is pretty great. Woe Strider does the same thing (but can't sac itself though), but costs more, but gives you 0/1 goat token and can get itself out of the graveyard.
Also, with those forcing sacrifice effects (Fleshbag Marauder etc.), how about It That Betrays to take over you opponent's stuff as either a fuel for your cards of beat them with their own cards? :D

Whenever dark prophet or another creature that you control dies, you lose 1 life and draw a card.

This creature is modeled after Dark Prophecy, which is a great card, but cannot do anything on its own. It has a higher mana cost, but one that is more lenient about its color requirements. I was contemplating making it either a zombie or a vampire, but I then decided that those types do not need to have every awesome effect that black has to offer.

Other creatures that you control get +1/+1 and have reach.

This creature is modeled after Spidersilk Armor, which, as with the previous enchantment, is useless without at least one creature on the battlefield. It has one minor yet important difference in that it also increases the power of other creatures on the battlefield, not only their toughness, since I feel that creatures in recent years have improved sufficiently that that is now acceptable. Again, I feel that a mere 1 mana more over its predecessor is acceptable.

At the beginning of your draw step, you may draw two additional cards. If you do, choose two cards in your hand drawn this turn. For each of those cards, pay 4 life or put the card on top of your library.

This creature is clearly inspired by Sylvan Library, which I actually feel is out of green's domain by today's standards; black would make much more sense for this effect, but I could not miss an opportunity to use that name. Unlike the previous two creatures, this one costs 2 mana more than its predecessor, because I personally feel that a mere 2 mana is far too low of a cost for such a powerful effect. I was planning to make this creature only a 2/2, but I felt that that would be too low for a creature that costs 4 mana, but a 3/3 would have been too powerful, so I made it a 2/3.

Each other permanent that you control has hexproof.

"I have lived a life of luxury, but that does not mean that I can ignore those who are less fortunate than myself."

This creature is inspired by Privileged Position, which, again, cannot do anything on its own. I kept the same mana cost, because I feel that that is the perfect cost for such an effect. The flavor text is to explain how this card makes sense: a princess is using her wealth and position of authority to assist others who are in need. Her low power is to show that she is not accustomed to a life of hardship, but her high toughness shows that she can afford protection (and also to prevent her from being destroyed by a single Lightning Bolt).

What does everyone else think of these cards? Did I do well with them?

Yes, they get to stack these triggers.

If a player controls both Dark Prophecy and Moldervine Reclamation, is at exactly 1 life, and then has a creature that they control destroyed, can they stack the abilities from the two enchantments so that they do not lose the game?