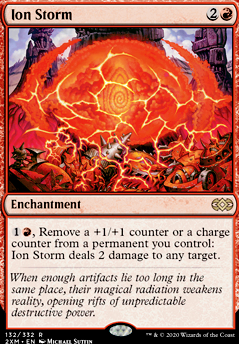 , Remove a +1/+1 counter or a charge counter from a permanent you control: Ion Storm deals 2 damage to target creature, player or planeswalker.

I dropped Lyzolda Blood Witch because quite frankly... I don't think it worked well enough in my deck. Brought it up to 3 Ion Storm because with a playset of Faithless Looting If i draw too many I can use them as discard fodder. As I can with Gravecrawler . Please let me know if there is a better approach.

zapyourtumor yeah I used to have Ion Storm at 3 but I wasn't sure if it was overkill or not. Thank you for your input!

I would definitely go up to at least 3 Ion Storm , recycling your undying creatures while also doing 2 damage for 2 mana seems very good in this deck.

Thank you for your inputGoblinsBeatElves! I like the Rakdos Carnarium idea so I've added it to the list. I like Generator Servant as well but I thought I'd try something a little different. I removed 1x Ion Storm and 1x Retribution of the Ancients and added 2x more Infernal Plunge. Please let me know what you think of the changes.

I run a decklist of this kind in GB, I play more casually so it's not really worth to share, but I can recommend you some great cards that works well in this archetype :

Evolutionary Leap, Oh my god I love this card, it produces so much value, it's not a free sac outlet, but it can find you a lot of creature while keeping yours on board thanks to undying and retribution. It also participate in combat tricks : " Block, sac to evolution. "

Lightning Coils, a nice alternate wincon, it's kinda slow because it's a 3-drop that does nothing, but when you hit the 5+ charge ( which is not that hard ) you can overwhelm the opponent with a huge attack. Bonus : You can sac the tokens to cards like Evolutionary leap or Scarland Thrinax once you're done with them !

I also like Yahenni, Undying Partisan, can sac for free, grow when the opponent's creatures dies, and even if they don't have much creatures, it's also hard to kill for control player, thanks to indestructible.

I also played my deck as Jund first, but went to BG because it was better for my mana base, there's other interesting cards in red :

Ion Storm, the main reason I tried playing with red, it's nice, but kinda too slow, that's why I ended up switching to BG.

Xenagos, the Reveler, thanks to all those small creatures that stack up easily and doesn't die easily, you can use it's +1 to generate the mana necessary for your biggest threaths. It's 0 is also useful to get some more creatures. And if you ever got to the -6, you'll get yourself an enormous board.

How about Ion Storm, Ordeal of Purphoros, or Curse of Stalked Prey?

Ion Storm seems like a really, really good card. I would try pairing it with graft or things like Scrounging Bandar.

It would also go well with undying creatures like Young Wolf, Strangleroot Geist, and Pyreheart Wolf.