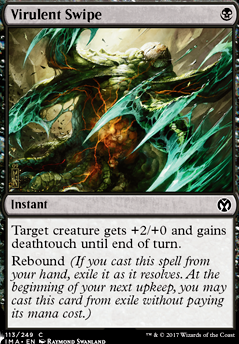 When I was first starting out I had a Rakdos Aggro deck (this was sometime just after Gatecrash) and I was playing in my first FNM. My deck had no sleeves and my opponent was so worried for me he talked to the shop owner and got me some free cheap sleeves for my deck. I had basically no money at the time so it really helped me out, plus it introduced me to the more wholesome side of the magic community.

Also later that night during one of the rounds I played a t1 Rakdos Cackler at the same time as two other people at two different tables. Someone pointed it out to us all, it was funny at the time (I know it sounds kind of lame).

Since then I've had plenty of fun and interesting plays, but none that stand out as much to me.

Cut some stuff for 2 more lands, I'd say. Spawn of Rix Maadi and Rakdos Cackler would probably be best to cut. Spawn isn't super impactful for a 5 drop, even if you do give it haste. Cackler (or any other aggressive one drop, for that matter) is awful in this format because every turn one you want to be playing your gate.

Rakdos Cackler is a strong 1 drop for marchesa, comes in as a 2/2, always has a counter on it so you can also reliably sacrifice it every players turn. (Great with something like goblin bombardment)

Making most or all of our creatures unblockable seems great, we can get in for a ton of damage or even knock someone out. But truth be told itâs not that important. If you attack and they do block youâre coming out ahead on the trade 9/10 times and so thereâs not really much downside there, youâll have a clear board the next turn probably. And weâre practically immune to board wipes, so we donât have to worry about that the board getting too full to attack through either. Iâd rather run Damnation in this slot given the choice since itâll be a lot more effective at solving this problem.

As for Profaner of the Dead, you are right about ETB effects, however bounce+counterspell is a thing for any major threats. And what you can do with marchesa+a counter on profaner is sacrifice profaner of the dead during a players turn, it returns to play at their end step (thanks marchesa) and then bounce all of their stuff at end step... leaving them completely vulnerable to the whole table for a full game round. With Profaner+Marchesa+Mimic/Sage you can do this on EACH players turn and that's where the real magic happens.

Also, I had an epiphany about Trophy Mage last night, it's even better than I thought, it fetches our 14 artifacts AND our 3 artifact creatures at 3CMC or less, one of which is a major combo piece Metallic Mimic, another which is a free to sacrifice creature Arcbound Worker and a card draw engine Baleful Strix.

Impaler shrike is basically a better/cheaper CMC mulldrifter with Marchesa. Sower of Temptation i'm not 100% sure I'll slot in yet, but it's still a definite consideration, just not sure what I want to cut in it's place yet.

I'm still interested in Teferi as well, giving all creatures flash and slowing our opponenets to sorcery speed is just so tempting... that triple blue though is a bit hard to swallow in a deck that's main color is black.

Right now the 2 cards I'm looking at for the cut list the most are land #36 and Rakdos Cackler... the cackler serves a good purpose of being sacrificable every turn on it's own but now with Trophy mage being able to pull out Arcbound Worker (effectively being the "2nd copy" of a free to sacrifice creature) the cackler might be on the chopping block for a creature that packs more of a value engine.

I'd say that your ranking of the 4 options is pretty accurate. You missed Smothering Abomination though, which is my number 2 pick I think, especially where it is a sac outlet in a way. Having flying also means it's a bit easier to get dethrone triggers with it if you need to.

I'm currently using Grim Haruspex because it's 3mana and has some wizard synergies, but smothering abomination is very high on my list of potential changes.

Midnight Reaper would be a good include if you needed more life loss cards, or if you needed more card draw and didn't want something like Necropotence. personally i have no issues on those fronts so I've opted to go for the cards i have here. midnight reaper is definitely a good option if you're looking for a low CMC card draw effect to replace Harvester of Souls or river kelpie.

The thing with persist is that other than Glen Elendra Archmage there are only two other creatures that are even worth considering. River Kelpie and Puppeteer Clique. the rest are basically just vanilla creatures essentially in that they have no abilities or other interactions with the deck's gameplan.

as i mentioned before, haruspex is just a more efficient effect than kelpie, 2 less mana is a lot. and i ran clique for a while actually, but i just rarely found myself making good use of the reanimation effect and so i dropped it for something else.

Anything > CMC4 has to be particularly good in my opinion, otherwise it's tough to play in a deck like this since we don't have the ramp that other (Green) decks have available. being able to get the most out of your mana each turn is a big big factor in how effective your deck is.

Undying is obviously much stronger than persist, but again, there's only really about two cards worth bothering with here.

a card which doesn't do more than one thing isn't usually a good pick in my opinion. a creature like Sightless Ghoul which is basically just an attacker with no really notable abilities isn't worth running when its only significant synergy with the deck is that it's hard to remove. cards like Rakdos Cackler are a much better way to get the same effect.

as for undying cards Pyreheart Wolf and Flayer of the Hatebound are the two (other than mikaeus). flayer is too expensive at 6CMC where all he does is give some incidental damage that can just as easily come from attacking. pyreheart wolf might be a decent include, but since i'm running a lot of cards like gravepact and such i can keep the board fairly clear and don't have to worry too much about blockers.

i find that glen elendra archmage is a very strong card in the deck though. flying makes dethrone easy and like you said, sage of fables makes it a great soft lock.

metallic mimic isn't worth it for me since my tribal synergy is pretty light. i have about 7 wizards and nothing else really overlaps much, but if you focus a bit more on the wizard theme though then it would be a great include for sure.

feel free to look at my queen marchesa deck if you want. it's public on my profile i believe.