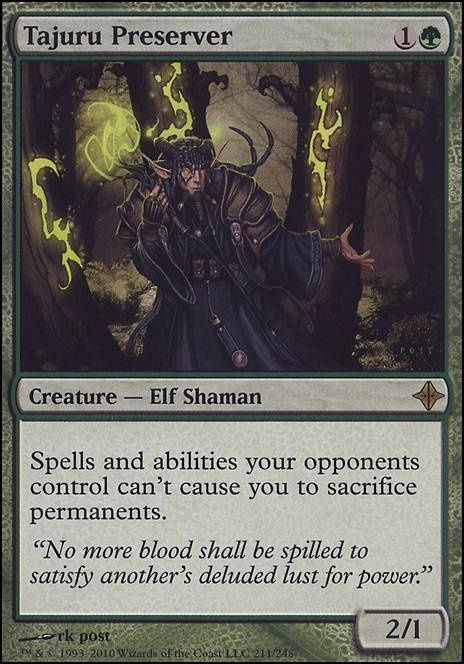 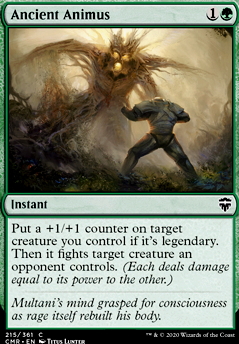 Elves on Parade
by MrShinju

-Swapped Crop Rotation out for Helix Pinnacle . I don't think I have enough utility lands nor landfall for Crop Rotation to be worth it.

-Swapped Tajuru Preserver for Veil of Summer . My playgroups don't run as many edict effects.

-Swapped Yeva for Vedalken Orrery . I value flashing in artifacts and enchantments more than flashing in Yeva .

The way my store runs commander events, we are not allowed to prevent anyone from playing in games for any reason (barring harassment or the like). As a group, we have agreed that bringing cEDH decks to casual events isn't a very sporting thing to do and we even agree to designate non-FNM days for cEDH games. Still, 2-3 of the roughly 40-50 players that come through the store are not willing to abide by that agreement. Many of us have had conversations with these individuals, and in one case, this did in fact resolve the problem. In an ideal world, every dispute would end this way, but reality isn't so kind. For the other cases, they are more than happy to hide behind the store policy and go on massive winning streaks despite a total lack of prize support and the inevitable isolation their behavior brings. It's absolutely their right to make that decision. In response though, I feel the rest of us should have access to as many tools as possible to improve the quality of our experience.

As for Archetype of Endurance, I should note that I usually get Prowling Serpopard out first and I have both Trolls of Tel-Jilad and Tajuru Preserver in the deck (which is composed of only lands and creatures for gimmicks' sake BTW). More than that though, my meta really is on the weaker side apart from the handful of outliers. Despite having 0 instants, sorceries, artifacts, or enchantments, my Momir is still on the very upper end of the meta's power level. When I mentioned that Sekki deck, that wasn't a hypothetical- that actually happened XD

Anyway, I apologize if I've seemed overly argumentative or combative. Maybe I'm still bitter about losing to Iona, Shield of Emeria for 5 years while competitive players kept telling me to get good, and now I secretly want them to suffer the same pain. I'll have to mention that to my therapist...

My fave method of dealing with hexproof is through gravepact and similar effects like annihilator. Only ways I know to avoid this method is to have a ton of weenies with hexproof that canât be wiped, or with a Tajuru Preserver. Correct me if Iâm wrong, but the sac effect targets players and not creatures. Itâs imprecise, but can be worked around, and avoids hexproofing.

Iâve stumbled across Lifeline. My meta has become very small due to the pandemic and for a variety of reasons including Crystalline Sliver and Sliver Hivelord, removal has moved toward sacrifice/exile effects. Outside of Tajuru Preserver which killed the theme, thereâs little recourse for recurring Fleshbag Marauder. I understand thereâs symmetry, which I remember being a turn-off for you in relation to Intruder Alarm but Lifeline seems to be a sure fire way to keep slivers in play without relying on coin flipping or having Patriarch's Bidding.

Sacrifice engines are a pain to deal with outside of just destroying them(as I'm sure you know) and there really aren't a lot of specific answers that aren't expensive unfortunately. Chevill, Bane of Monsters is relatively inexpensive and, while slow, can deter opponents from sacrificing somewhat. Tajuru Preserver is a good pick if your opponents are using something like Dictate of Erebos. Sigarda, Host of Herons is pricier than I usually like to go, but is a similar pick, and better suited to combat. Otherwise, all I can think of is using cards like Alpha Authority to protect specific cards(like Atraxa.)