Sigil of the Empty Throne

Whenever you cast an enchantment spell, create a 4/4 white Angel creature token with flying.

Estrid, Bunch of Buddies
by GaryFromPalletTown 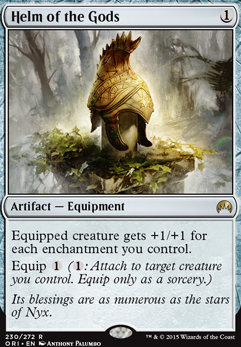 Sigil of the Empty Throne Discussion

I use Mana Bloom where X is 0 so that once Sigil of the Empty Throne is out, I'm consistently able to create 4/4 Angels every turn. I do agree with your mana base changes, and I'm gonna test out some of the other things too!

Just updated..Its primarily a voltron strategy but can go wide with Luminarch Ascension, Sigil of the Empty Throne and Ajani's Chosen. Also has Enchanted Evening combo for back up win con.

I'd drop the Angel token creators. Focus on things that enhance your theme. So you could take out Invocation of Saint Traft, Sigil of the Empty Throne and Moonsilver Spear. They are good if you had any interaction with those tokens or if your strategy was based around them, but you already generate them with your Commander and you shouldn't need more than that. Azorius Locket and Commander's Sphere are not great mana rocks and could probably go as well.

I loved doing that sort of thing back in the day. The very original version of this deck used Porphyry Nodes. I'm trying to figure out the best recipe. I really want to make a deck like this actually work.

Considering the Mono-White Solemnity Angels deck that some people ran, I'm wondering if full shield mode with Suppression Field, Privileged Position (over Sigil of the Empty Throne), Avacyn, and some countermagic wouldn't be the way to go.

Here are my recs.

Sphere of Safety: This is amazing in enchantment decks. However, you're playing a linear strategy where optimally you can't take damage, so you're opponents shouldn't ever have a need/want to directly attack you. You already have propaganda/ghostly prison which can be fetched by zur.

Mana Leak: You have a few counterspells already. Cut or replace with Swan Song.

Anguished Unmaking: Good card. But, you already are running 3 enchantments that zur can fetch that can exile any permanent. Over redundant.

Worship: You have multiple, 'I can't die effects.' Can't be fecthed by zur and useless in a vacuum.

Narset's Reversal: This isn't as good as it seems. Its best use it on your own instant or sorcery (like time warp), otherwise you just put the problematic card back in your opponents hand. This can be good but best for spell slinger decks.

Enlightened Tutor: Your commander tutors for just about everything you want. Brainstorm would be better because it could put an enchantment you want to play back in your library for zur.

Vampiric Tutor: Doesn't put a card to hand. Your commander should be able to fetch everything.

Luminous Broodmoth: The only creature you want to save is zur and he has flying.

Mesa Enchantress: She draws cards on cast. There is an enchantment creature (forget the name) that draws on entering. It costs 2GG but would be better than this. Though, zur should provide you enough card advantage on his own.

Spirit of the Labyrinth: You have 2 enchantments that do the same exact thing. Keep the enchantment ones and drop the one that dies to wraths.

Dance of the Manse: You don't want your enchantments to become creatures. You have graveyard recover already, though it doesn't interact well with Rest in Peace.

As for All That Glitters, don't add it. Put in Ancestral Mask instead if its a consideration. Mask will boost zur waaay more.

Really like all the synergies surrounding the deck however maybe replacing 1 or both of the Sigil of the Empty Throne with powerful aura cards, such as Angelic Destiny, that can be tutored through Gatherer of Graces would give the deck more consistency.