Return up to X target artifact and/or non-Aura enchantment cards each with converted mana cost X or less from your graveyard to the battlefield. If X is 6 or more, those permanents are 4/4 creatures in addition to their other types.

Jack Of All Trades
by LordOfSpuds 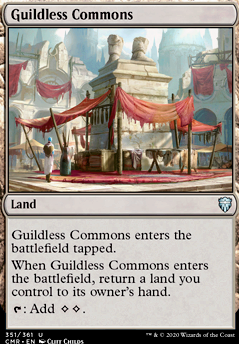 Dance of the Manse Discussion

Amazing! A few of Dance of the Manse might not be terrible; if you leaned into graveyard strats with Thought Scours instead of Serum Visions, and perhaps some Taigam's Schemings and/or Gifts Ungiven, you could absolutely make it your game strategy, get all your stuff out at once. Really neat deck!

Considering swapping out Reflections of Littjara and Cryptic Gateway , neither ever seem to be as impactful as they should be at that mana cost.

Considering The Scarab God or maybe even Dance of the Manse for recursion shenanigans.

Whenever a nonland permanent becomes tapped, choose a player at random then players gains control of that permanent.

When Gravitational Flux leaves the battlefield each player gains control of all nonland permanents they own.

In the absence of gravity things have a tendency to simply... float away.

The card intended to be used here was Dance of the Manse but I wouldn't be surprised if there were a few other cards that would fit this as well.

Create a creature or planeswalker that does some messing with gravity in the flavor.

seshiro_of_the_orochi on Pattern of deck Pool?

Disclaimer: I do realize this is a very open-ended topic with highly subjective possible answers. Nonetheless, I'm very interested what other users do think about this.

What is this topic? Here we go:

I'm a person with a very pattern-oriented mind. I like it when I can find patterns and small logical connections. This relates to numbers, to grammatical similarities over different languages, the way tiles are laid out, personality types and how to handle them and so on...

And I also like to find patterns in commander deck pools.

For example, I've considered to build a deck for each existing colour or combination of colours (I gave up on this...way too expensive).

Other patterns I have or had:

This way of thinking lead to frustration sometimes, as I got annoyed by not continuing the pattern. Currently, I've accepted this. I don't want to force myself into building a deck that doesn't make me excited when thinking about finally playing it. This order of priorities works fine for me.

Ok, here are my questions: Do you recognize this pattern of seeing patterns from yourself? Are you disturbed by this way of thinking? Do you have some of these or other patterns yourself? I'd love to hear your thoughts and ideas on this. Happy exchange!

Banishing Light doesn't have a cmc restriction on targets though.

Banishing Light also has synergy with Calix, Destiny's Hand and can be fetched back with Dance of the Manse if need be.

Would love to run this with the only creatures being the Fae of Wishes as it generally functions as a creatureless deck.

Thank you for taking a look and I appreciate the suggestion.