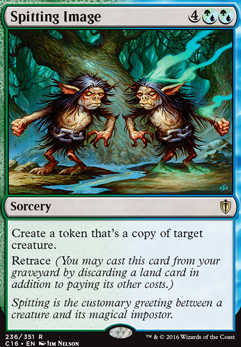 Create a token that's a copy of target creature.

Riku of the Clone Wars
by zaerox12345

NoSoyYucateco No problem at all! I honestly never get to deck build with others, so I'm loving this. You're absolutely right about the tap lands. PLUS, replacing the tap lands with basics would allow larger boundless realms grabs. Forests definitely. Nothing feels quite as bad as a land full of green ramp with no forests in hand lol. I love the idea of using flameshadow conjuring. An extra ETB from one red (or two extras with a panharmonicon or parallel lives!) is just really good. Regarding Praetor's Counsel, my biggest concern with replacing it for Mizzix's Mastery is that I'd want to get back my creatures from the graveyard...but I have an Ewit, greenwarden, and token makers so that shouldn't be a problem. Three more questions for you: 1. If you were to pair down my instant/sorcery list to 25 and add creatures up to 25, what would be your cuts and additions. 2. If you were to replace the extra turn spells and palinchron for a more sensitive play group, what would you slot in instead. 3. And how do you feel about Spitting Image?? I feel like it COULD be abusable, but it seems like a lot of work lol. And again thanks, I'm really enjoying your input.

Spitting Image set the precedent of GU (Simic) getting clones.

Congratulations for your deck! I like the idea of cloning stuff, and I am still trying to find a build that works. If I can give you a hint, prefer cards that can clone any creature on the field over the cards that can only clone your creatures (everyone should have a Consecrated Sphinx , right? Not only your opponent).

I don't feel like would help you much with cloning. The best (and maybe only) white card that refers to cloning is Mirrorweave .

If you look at https://edhrec.com/themes/clones, you will see that almost all clone effects are blue: Clone , Vizier of Many Faces , Gigantoplasm , Vesuvan Shapeshifter , Body Double , Mirror Image , Supplant Form , Blatant Thievery , Clone Legion , Mirror Match . If you want to copy spells aswell, Insidious Will , Swarm Intelligence and Spelltwine are there for you.

gives you Evil Twin and all black tutors and removal.

gives you Altered Ego , Progenitor Mimic , Spitting Image and all of green ramp and removal. For me, it is the best color to splash on a blue clone deck, because it also allows the Biovisionary alternative win-condition.

As long as commander suggestions are concerned, here are some ideas:

Riku of Two Reflections is the go-to clone commander. He has all the relevant colors for cloning (), but he is crazy expensive at 20 dollars, so it might be good to consider other options:

You can have Keiga, the Tide Star as your commander. This way, you can clone him and let the copy Keiga die to the legend rule. When the Keiga copy dies, you can steal an opponent's creature, while still having the original Keiga.

You can have Brudiclad, Telchor Engineer as your commander. He is a win condition by himself, giving tokens haste and making all of them bigger. Red gives you a lot of token generators: Brass's Bounty , Flameshadow Conjuring , Storm the Vault  Flip among others. Imagine creating a token copy of a Kokusho, the Evening Star , then turn all your tokens into Kokusho, then sacrificing all them to the legend rule, then draining all your oponents for lethal. Great value!

You can have Tatyova, Benthic Druid as your commander. She doesn't refer to a clone strategy, but she gives a lot of card draw by just playing lands (your hand will always be filled). You can clone Rampaging Baloths and Avenger of Zendikar for a massive win. Also, you have access to all the blue-green clones and the Biovisionary + Rite of Replication combo.

If you want to use altogether, you might consider Yidris, Maelstrom Wielder or Kynaios and Tiro of Meletis . Yidris allows you to use Evil Twin and all the black removal. Yidris also increases the value you get from playing spells by cascading into other spells. // K&T, on the other hand, gives you card advantage and makes you less threatening while you build your board. White also gives you access to great boardwipes ( Austere Command ).

All in all, good luck in your deckbuilding and have fun!

I have a few myself. In no particular order.

Transfigure - No, not transmute, Fleshwrither 's ability. I realize this one would be used sparingly... but a buy-a-box promo? (Affinity for Artifacts coming back raised the bar). I'd personally want a 3 drop.

Retrace - I.e. Spitting Image . Such a good use for excess lands.

Have We Got Ourselves a Deal?

You're missing Spitting Image . You won't be disappointed by a late game land draw anymore... retrace is busted.