Whenever enchanted creature attacks, you may put a token onto the battlefield that's a copy of that creature. Exile that token at end of combat. 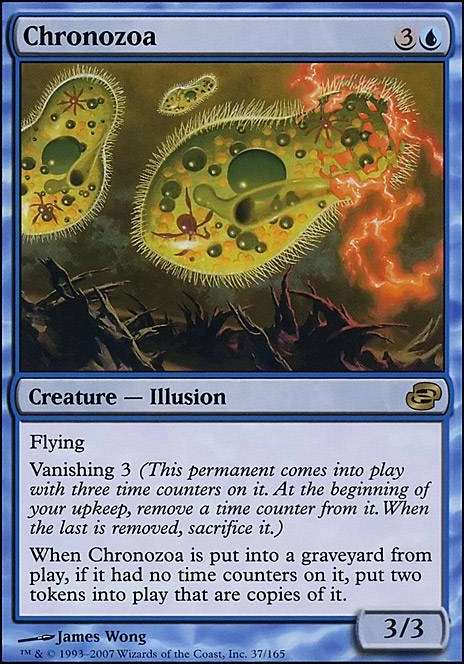 Cast this spell only during combat after blockers are declared.

Create a creature token that is a copy of target creature that is attacking you. The token blocks that creature. Exile the token at the end of combat.

I modeled this blue fight spell as a combination of Mirror Mockery and Flash Foliage.

Hey CrowValentine Oof That Mirror Mockery is gross i forgot about that one. I was trying to avoid single use spells as I want to use artifacts to flicker and if i use voidwalk and have a reduced boardstate Thassa might kill it. What would be your recommendation to take out if I were to add Mirror Mockery?

I love the intention behind this. I really wanna see that karaoke. One important point: As far as I know, EDHrec doesn't include data from tappedout, so uploading lists here will only help in providing awesome lists, but it won't count towards the 600.

Now to the topic:

Clones seems the way to go indeed. Helm of the Host is interesting for Alirios, as are Followed Footsteps and maybe Clone Legion. Also: Infinite Reflection, Minion Reflector, Mirror Mockery, Stolen Identity, Zndrsplt's Judgment. And permanent flicker sources should be useful, as well: Conjurer's Closet, Deadeye Navigator, Thassa, Deep-Dwelling. Oh, and if there ever was a deck to include Identity Thief, this is it.

DarthDC I'm an advocate for greaves over swiftfoot boots but you can always include both.

There are plenty of cards that can cheaply replicate and reuse some of your most powerful ETB cards. I'm thinking of clones or psuedo clones like Progenitor Mimic , Mirror Mockery , Phantasmal Image , Rite of Replication , Blade of Selves , Bramble Sovereign (also is an ETB ability so by paying 2GG you can have an ETB go off 6 times with Yarok!!), Faerie Artisans (another ETB trigger that Yarok doubles), etc.

The above cards aren't really control cards but more value oriented. Some of them are very efficient though so I would suggest using them.

Haha all I'm doing is suggesting cards I have in my Yarok deck so sometime soon I will get around to making a deck list and I'll send you the link.