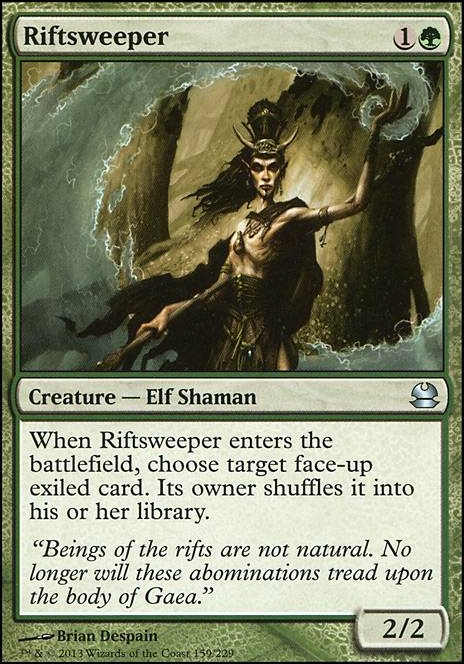 When Riftsweeper enters the battlefield, choose target face-up card that's removed from the game. Its owner shuffles it into his or her library. 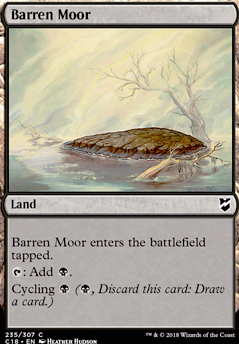 If you're having problems with your opponents exiling your graveyard or specific cards in your graveyard then consider adding Riftsweeper? It can put a card that's in exile back into your library. Being a creature gives it interaction with Meren to reuse it abilities. Can also play politics with Riftsweeper since you can target an opponents card in exile. Gravepurge for three mana at instant speed can save as many creatures as you like in your graveyard from being exiled and you also get to draw one of those creatures.

In Golgari colors can get draw from many better sources than lands. The Deserts are good cuts since you don't want to play too many Cycling lands which can be problematic. Most likely it will come up you'll have to play one as a land drop which is worse than a basic land.

Mhm, the drain is important whereas the ETB on creatures doesn't really matter as much for the meta I am in. As of currently I don't see the point in having it atm, if anything I would trade Zulaport as what you did but I'm quite fine having it without it. I always have Riftsweeper and Pull from Eternity as a backup scenario. However the plus isde is having a 2/2 for Tymna but that isn't often but may count one day.

The cards needed in the description are all excellent upgrades and the cards you cut are good choices. One thing to keep in mind when you add more dredge creatures are ways to get them back into your graveyard from your hand. Fauna Shaman is repeatable discard a creature while also getting to tutor for any other creature. Tortured Existence is discard a creature to then recur any other creature. It's excellent with Eternal Witness who you have here to keep having access to her. Genesis wants to be in your graveyard to be another repeatable source of creature recursion.

Altar of Dementia is one of the best repeatable sources of self-mill and a sac outlet to get creatures you want to cast into your graveyard. Izoni + Nim Deathmantle + Ashnod's Altar is infinite Insects which if you add Zulaport Cutthroat is a win condition by sacing all Insects. Witness can recur these artifacts after you self-mill them. Jarad's Orders tutors for two creatures and puts one of them into your graveyard.

Dread Return and Victimize are two budget reanimation spells that are enablers for some crazy combos especially Return since you can self-mill and then cast it with flashback from your graveyard. Both are good with Insects since you have to sac creature(s) to reanimate. Riftsweeper is helpful support creature when you're relying on your graveyard since your graveyard or specific cards in it will be targets for exile. Rift can shuffle a card in exile back into your library.

This deck, as it is, seems very weak to Devoted Druid getting exiled, as it doesn't really look like you have a plan B. You don't even have Riftsweeper. That said, I do love your idea of utilizing Assassin's Trophy and/or Finale of Devastation to win. I've been brewing with Tayam for a while, and I'm using Syr Konrad, the Grim in mine with Mesmeric Orb + Basalt Monolith as a way to mill myself without Tayam & the Druid, but this strategy does require I run more potentially "dead" cards, like Gaea's Blessing, Vigor, Sevinne's Reclamation, Animate Dead, Dance of the Dead and Konrad. Although the only of those that feel truly dead in hand to me is Konrad and Vigor, but they are all taking the slot of cards that could be more generally useful, like more tutors and removal.

Also, why no Angel's Grace? I feel like it's a must-have in any deck with white that lacks blue, it's such an incredible response to combos, especially Demonic Consultation + Thassa's Oracle.