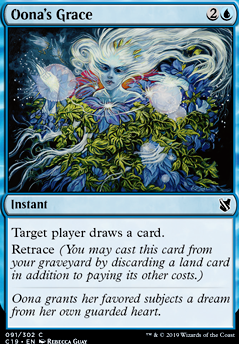 Oona, Queen of the Fae
by Empress_Raka

Fell Wrath of the Sky Summoner
by DreadKhan 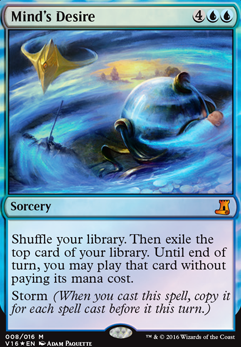 Butter up your Booty Baral

Thanks for your suggestions! Ive run both cards in my deck in the past and have taken them out for a couple reasons. Sol ring drew hate and often my cards would need double blue, and you cant get that in sol ring. I also already have so many mana accelerators. Recurring insight suffers from a high mana cost and sorcery speed. I prefer Opportunity for the instant speed and the guaranteed card draw. Crucible is in there for some niche reasons. It goes great with Barals ability, Monastery Siege , and Oona's Grace , by minimizing the penalty from these cards. It also helps to give consistent land drops later in the game.

Thanks again for your suggestions! I think I'm going to edit the description to go into some of the nuances of the deck.

Greetings, human! Below are my suggestions; feel free to heed/ignore them as you choose.

In EDH, playtesting with your meta is really the only way to know how much counter, burn and card-draw you need. That being said, you typically want a cantrip and a counter in your opening hand, which means running approximately 5 - 10 of each is a good idea. I think Preordain should definitely be in your deck alongside your Ponder , and Brainstorm becomes astronomically better with shuffle effects. Although the Zendikar and Onslaught fetches can be very expensive, cheaper alternatives definitely exist: Terramorphic Expanse is functionally identical with the Evolving Wilds I see you're running; the slow fetches (like Flood Plain and Rocky Tar Pit ) are on the table; and Ash Barrens is around $3 these days. Aside from Preordain , some card-draw/filtering spells I advise at least considering are: Impulse , Chart a Course , Faithless Looting , Chemister's Insight , Archmage's Charm , Think Twice , Oona's Grace , Frantic Search , Sleight of Hand , Pull from Tomorrow , Fact or Fiction , Dig Through Time and Treasure Cruise . Slate of Ancestry is an artifact source of repeatable card advantage.

I suggest Faithless Looting , Chemister's Insight , Think Twice and Oona's Grace because you can cast them from your graveyard. This will give you extra triggers off of Kykar, Wind's Fury and Jeskai Ascendancy . Similarly, if you choose to run cards like Young Pyromancer and Monastery Mentor (which I highly suggest you do), these cards will get additional triggers as well. Murmuring Mystic is another creature to consider, as is Taigam, Ojutai Master .

Burn spells are tough in EDH, if only because you have three times as many opponents as usual, and they all have double the usual life total. So burn is typically going to be spot removal or mass removal rather than to-the-face, like in Modern. Generally, I do not recommend running many one-for-ones in a format where you're facing three opponents rather than one; the only one-for-one I highly suggest is Swords to Plowshares . Electrolyze is an instant that does not cost card advantage, so I advise this too. Mass-removal, like Wrath of God , Pyroclasm or Supreme Verdict is generally much more successful. However, because of your general and the nature of your deck, you'll likely want to only run one or two board-wipes. Things like Shattering Spree , By Force , Dust to Dust , Return to Dust , Grasp of Fate and Vandalblast are also worth considering.

Counter magic is good. I advise adding a few spells to your current package. Consider the following: Swan Song , Dispel , Exclude , Unified Will , Remand (maybe -- it's a meta call), Negate , Flusterstorm , and, provided you have access, Cryptic Command , Force of Will , Mana Drain and Pact of Negation .

An area that I see as being capable of a lot of improvement is your mana-base. Though the best fixing is, of course, wildly expensive, affordable options exist. Steam Vents , Hallowed Fountain and Sacred Foundry are all about $10 or so these days, as are City of Brass and Mana Confluence . I personally like Reflecting Pool , Exotic Orchard and Forbidden Orchard as well.

As Foretold is at least worth considering. Aetherflux Reservoir is, I think, probably better than Sentinel Tower , though if your meta is filled with creatures you can nail with the Sentinel Tower then you may wish to keep it. If you want to go on the aggro plan, Supreme Phantom is also worth considering, as is Intangible Virtue . Kindred Discovery is good if you name "Spirits." If you are like me and don't have ethical qualms about infinite combos, Isochron Scepter with Dramatic Reversal is a good way to make infinite tokens if you have enough rocks out.

Speaking of rocks, I like your current suite. I'd also consider Mind Stone , Coldsteel Heart (maybe), Fellwar Stone and Everflowing Chalice . Arcane Signet is coming out soon, and that's definitely worth an include.

Right. That's all from me. Good luck with deck-building!

Loving this list! Always down for some Oona action : )

I may be missing it, but does Tunnel Vision mill you for the Jace, Wielder of Mysteries win or is it for your opponents? Personally, I love Tunnel Vision ! I used to run a 60-card deck that was pretty vicious with Junktroller effects.

Also, you could most likely find a better draw card to replace Oona's Grace . I rocked it in my Oona deck to little effect which is a bummer! Love the art and the the name fits so well thematically. Maybe a Baleful Strix or even a Pulse of the Grid would draw you cards at a better rate and be better late-game.

Lightning Bolt is a vard you should avoid playing in Commander, even thugh very many people do. It is essentially a wasted slot and a bad card in hand. If you are playing against 3 people, 3 damage to the face against 120 life is laughably bad, especially with a commander, that gives you free Lightning Bolt with every Brainstorm you cast... as for the removal aspect - don't you want to remove the big creatures rather than the small ones? A conditional creature removal for small things is way too limited and low impact for commander. Rapid Hybridization or Pongify would fill this role a lot better.

Same goes for Oona's Grace . Why would you pay 3 Mana and discard a card to draw one single card over and over, if you can draw cards in so many other and cheaper ways?

Go big or go home, especially in EDH and in particular as a part of the Izzet League!