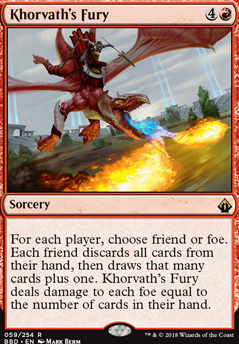 For each player, choose whether they are a friend or a foe. Each friend discards all cards from their hand, then draws that many cards plus one. Khorvath's Fury deals damage to each foe equal to the number of cards in their hand.

Khorvath's Fury occurrence in decks from the last year 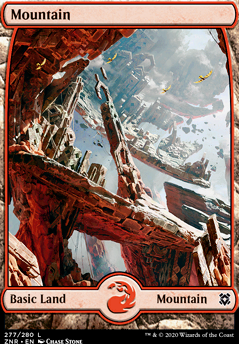 Migration Path -> Moss Diamond might be better to have cheaper ramp

Explosive Vegetation -> Sky Diamond might be better to have cheaper ramp

seshiro the annointed -> Eldrazi Monument Save money; helps with boardwipes; flying for getting damage through

Reforge the Soul -> Khorvath's Fury Really just to save money

Ominous Seas for Helm of the Ghastlord

Game Plan for Echo of Eons

Pikobyte i will surely do it, thanks!

I liked Leng because it was also allowing me to avoid forced discards from my opponent as well as removing handsize limit, with that being said i could swap Molten Psyche with Khorvath's Fury, what do you think?

Ignite the Future and Khorvath's Fury might be worth considering