Snake offering (You may play this card any time you could play an instant by sacrificing a Snake and paying the difference in mana costs between this and the sacrificed Snake. Mana cost includes color.)

: Untap all Forests and all green creatures. Activate this ability only once each turn.

Patron of the Orochi occurrence in decks from the last year The Power of Broccoli Mana
by GoatLord

No Green, No Mana (Orochi EDH)
by TheCardPool 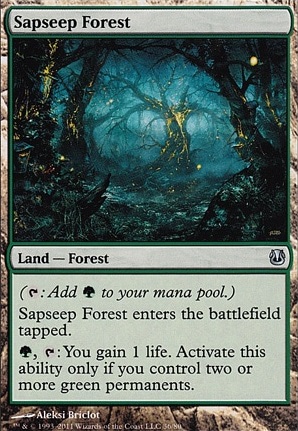 Patron of the Orochi Discussion

Fallen Ideal (similar to denizen. sac your tokens right before lathril hits to deal a ton more damage and make twice as many tokens as you had before)

You might like these: Umbral Mantle, Staff of Domination, Manascape Refractor, Thousand-Year Elixir, Temur Sabertooth, Wirewood Lodge, Patron of the Orochi, Hall of Gemstone, Calming Verse

Sakura-Tribe Elder is a good card, as you can tap it for mana and sac it for a land tutor, and Leyline of Abundance is great in any Sachi deck. Another great card to add is Patron of the Orochi.

Hey there! Thanks for the kind recommendations (and the upvote :p). So I just got a Caged Sun so that's going in soon. This deck isn't really going for tons of lands, so while Exploration is great I don't think I will find a place for it. Burgeoning is better In a 4 player game, so I am still considering it. Extraplanar Lens while probably eventually end up in the deck but the price tag is a bit much right now. Oracle of Mul Daya is like exploration. Gauntlet of Power might work but it is a bit too much group hug. Patron of the Orochi is one that I had to give a second look and it looks pretty decent but I doubt I would use it. This isn't really going to be a swarm deck, so Triumph of the Hordes doesn't work that well. The rest fall under, when I find the card/find the money I will pick it up.

Hey there! Maybe consider some of the following!

Hope this helps, and have a great day!