rin and seri
by Deadpoetic1 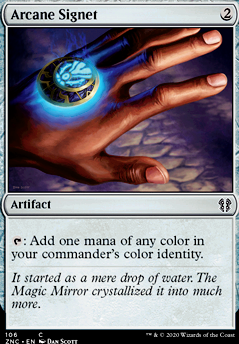 Isamaru, Hound of Konda could be a decent Voltron. Also: Norin the Wary

I wasn't around for it. Could someone please explain to me why Isamaru, Hound of Konda is Legendary, when it is literally just a 2/2 for ? Did it have a significant impact in the lore?

This is a really cool deck, dose the activated on Rin and Seri still work even though the cards creature type is hound? EX: Isamaru, Hound of Konda

We already have a copy of Collector Ouphe in the Mainboard. I agree that it's a perfect fit here. Stony Silence would be amazing, and I do own a spare copy. Didn't realize that none of my current Artifacts have activated abilities.

That card will fit so well. Just need to decide what to replace. If you have any suggestions, feel free. Likely a lesser 1-3 mana cat. Although the deck really wants a 1-drop kitty in every starting hand, there are some less potent ones.. or maybe replace Dust to Dust since in essence, a Stony Silence will stop most of the opponent's useful artifacts from being used, and is lower cmc as a bonus. Thoughts?

Kataki, War's Wage is the tougher sell. I wanna keep dropping cats, and don't really want to pay that added cost myself if I happen to land a nice equipment. If it's not going to lock the game win for me, I'll be in a bad spot paying added upkeep costs for it while still trying to find a win. I know a lot of people really love that card, and I've had it in my Isamaru, Hound of Konda deck previously, but it just seemed very underwhelming and too situational for my play style. I can see it being very useful, but I'd pilot it terribly, which is likely just a fault of my own. But at least a fault I'm aware of.

These were great tips, and I really appreciate them. If you have any ideas to improve on my lands, I'm all ears. Thanks!