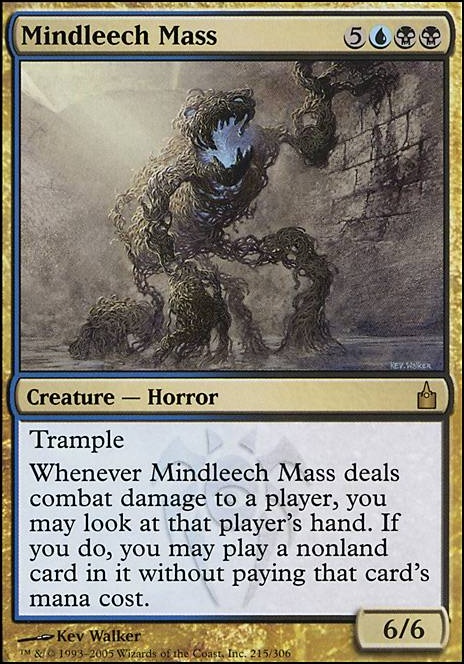 Whenever Mindleech Mass deals combat damage to a player, you may look at that player's hand. If you do, you may play a nonland card in it without paying that card's mana cost.

Everybody was kung fu fighting - Satoru
by SilentBladeOni

I have replaced Dromar, the Banisher _ with Yennett, Cryptic Sovereign , because, as much as I wish to have all ten primordial dragons in my decks, Dromar is highly situational, because he hurts his controller three-fifths of the time.

I have replaced Mindleech Mass with Blizzard Specter , mainly because the specter has a lower mana cost than does the mass.

I have replaced Szadek, Lord of Secrets with Nemesis of Reason , because, while it is great that Szadek grows more powerful with each attack, milling my opponents' cards is not a central strategy of this deck, so I cannot afford to pay Szadek's high mana cost.

These three changes together reduced this deck's average converted mana cost from 4.24 to 4.13, which is very nice.

I'd like to give another suggestion: How about Fallen Shinobi or Silent-Blade Oni ? Both do something similar to Mindleech Mass but can take a slot on your curve much earlier.

I have a copy of Mindleech Mass in my black/white/blue EDH deck, and I now realize that that card is simply far too expensive for me to be able to reliably cast it, so I am planning to replace it with another card, and my choices are Blizzard Specter , Nightveil Specter , Duskmantle Seer , or Nemesis of Reason .

What does everyone else say about this subject? Which card should I put in the deck in place of Mindleech Mass ?

I slept on Lochmere Serpent. I think this one has some interesting potential and with Life from the Loam sacrificing lands isn't too terrible.

I've been trying to figure out what we would replace for End-Raze Forerunners for a while. There's a couple pet cards like Mindleech Mass I'm having trouble removing from the list due it's cool ability and art, but maybe it's time.