, Sacrifice Black Lotus: Add three mana of any one color to your mana pool.

Lands are Weak!
by floatedcoyote44 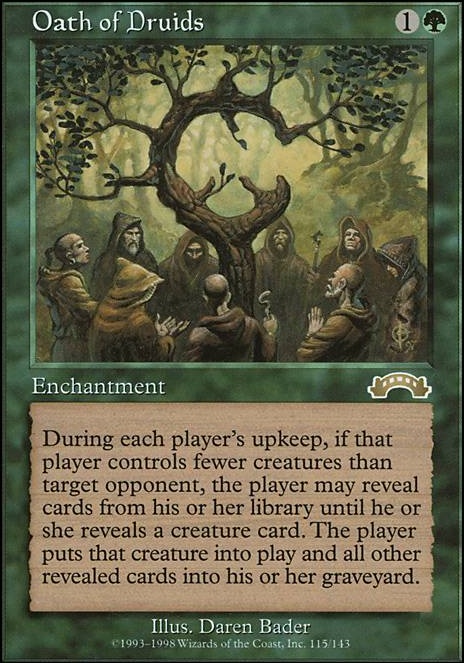 The Ultimate Artifact Deck
by dynosawrrawr

Letâs Do the Time Walk Again
by ZuranSorcerer

SquirrelPenguin on Casual: What Does it Actually ...

well, i tried to play unsanctioned over video camera with the black/green deck, then they thought silver-border was overpowered and switched decks. next thing i know was i was being munched by Black Lotuses, Mana Vault infinite mana combos, multiple Emrakul, the Aeons Torns and 4 billion p/t Walking Ballistas on turn one. they were probably all proxies.

This is obviously a premium product not meant for the common player. Do we really want fetchlands to be cheap and affordable? I sure as hell don't, even premium reprints like this that are meant for the "whales" will decrease the price of fetchlands. It would be like if they decided to add The Tabernacle at Pendrell Vale Bazaar of Baghdad The Abyss Mox Diamond Black Lotus and the rest of power 9 along with making all of the original dual lands, fetch lands and shock lands common cards and putting all of that into a unlimited print run set for standard. Some cards need to be extremely rare and hard to get a hold of and permenantly expensive and rarely or never reprinted again to ensure that not every player can just have them in every deck they own. I think that is a big point of this that some people are missing is that they are not reprinting this as some common card like you want it to be for standard, it's for the whales and I for one cannot wait to spend, even as much as $250.00 to get my hands on this collection. Heck, give me an extra two weeks and I will three 350 at it to get my hands on it. It is going to look amazing as a display piece and the arid mesa is done by my favorite land artist.

Plus I only built this deck to crush my friends and mostly to teach them why it's not nice to run Black Lotus and the other power nine.

RNR_Gaming: I wouldn't call them "narrow scope" as the effects align with what white generally wants to do. But yes, they are conditional.

I do also think that it's a bit unfair to compare white's draw power to something like Brainstorm or its tutor power to Demonic Tutor and then claim it's not as good. I get where you're coming from but I kind of hear "well no shit, Sherlock" in the back of my mind :P After all, cards like Brainstorm and Demonic Tutor are THE gold standard when it comes to those effects. In fact, forget gold, they are the diamond standard and are some of the the best effects in the game. The fact that Demonic Tutor is restricted in Vintage (which puts it in the same pool of cards as Black Lotus) should tell you something about its pure power.

And again with Skullclamp - sure it needs sacrifice fodder, but generally you wouldn't be playing the card if you weren't running weenies/tokens to feed to it.

Jester_Gren: I think that due to a combination of colour identity rules and the fact that it's a multiplayer format, I think that commadner players are in a unique position compared to most other formats (barring the commander "spin-offs" - looking at you brawl). Now combine this with that fact that the majority of poeple play commander on the very casual end of the spectrum.

Now in addition to this, commander players have been spoiled in the past with a bunch of "made for commander" big, splashy cards that do a variety of effects we haven't seen before.

Unfortunately however, all this has the effect that the average commander player acts the most entitled of any format. And look, most plaerys have talked about designing their own custom commander at some point or another and most people have at some point thought about trying to make some stupid rube goldberg machine of a deck.

But at the end of the day, we still need to impose some sort of boundary conditions on the game. I have seen people unknowingly break the rules fo the game and when they were corrected on it, the response was to just continue breaking the rules because they preferred to play that way. So then what's the point of having rules?

Same thing goes here too - white is designed to be the opposite of all the other colours in the game. Despite blue having counterspells, white is by far the most oppessive colour. It's just that it's proactive in it, not reactive. But now a bunch of poeple want to change that because they don't want to play white that way?

Without being too reductive, a big chunk of this arguement boils down to players saying "I want to build a mono-white deck with all of the big, fat creatures that mono-white offers. But I want WotC to make my bad deck design viable by printing a bunch of cards to compensate for my deck's huge lacking in multiple areas."

And again, I get that we need to take into account the general happiness of the player base. But pandering to a bunch of players who have no idea about game designs or the potential repercussions of their demands just becuase they're loud is a really short sighted idea. We've all seen what a dickhead the spoiled kid grows up to be.

Let's come up with a list of banned cards... Any card that we ban must be banned by MTG: 1. Black Lotus

Deathdragon That is without a shadow of a doubt the most powerful card I have ever seen, as in better than all of the power except Ancestral Recall and Black Lotus. Zero mana colored ramp and fixing combined with a "charm" spell that tutors, draws, and removes.

{T}: Add one mana of any color that can only be spent on Ooze cards.

So, I'm bad at naming/flavor and this probably should have either the fixing or the activated ability.

Create a mono colored common/uncommon that uses an older interpretation of the color pie (or a cycle of them if you want).

Given enough abuses, people may be more accepting of proxies. So long as you're upfront about it, my local LGS goers seem pretty ok with it. They understand that the game is slowly pricing itself out of existence, and would rather play with someone than pride themselves on pricey cardboard at the expense of playing with it. It may be worth exploring that if you're still interested in playing.

This goes for everyone who is debating between buying MTG cards and something else. One can be proxied, and the worst case scenario is some wasted paper and time. Best case is fun matches without the need to pay hundreds (just please don't go overboard with the Black Lotus es

rockleemyhero on 6 mana turn one, green ...